-Troops to intensify operations against bandits 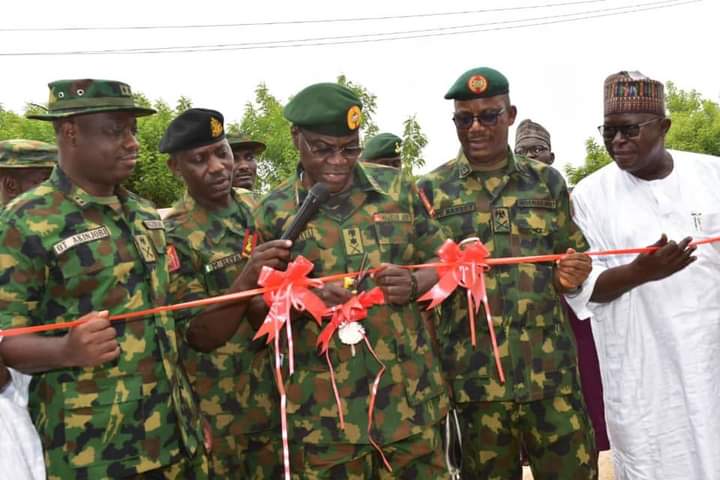 The Chief of Army Staff (COAS), Lieutenant General Faruk Yahaya has commissioned 12 blocks of self contained accommodation for soldiers and their families at 223 Battalion, Dakkarawa Barracks, Zuru in Kebbi state.

A statement by the Director Army Public Relations, Brigadier General Onyema Nwachukwu he said, the COAS commissioned the project on Wednesday while continuing his operational tour of 8 Division Area of Responsibility in the North West.

According to the statement, Gen Yahaya, in his remarks at the commissioning ceremony stated that his visit was to assess the current security situation and troops’ readiness, as well as obtain first hand information on the state of infrastructure in the barracks.

He said having inspected the Barracks, he was determined to provide requisite infrastructural development that will enhance the welfare of troops and their families in the barracks.

He further assured the barracks community that additional 12 blocks will be renovated and remodelled, aside a mini water work that will be constructed to mitigate the perennial water shortage in the barracks.

The Army Boss disclosed that the intervention was necessitated by his drive to create a conducive environment for soldiers’ families to enable troops effectively carryout their duties in the right frame of mind where ever they are deployed.

He urged the troops to intensify ongoing operations against the bandits and other criminals in their area of responsibility.

The COAS also paid an obeisance visit to His Royal Highness, the Emir of Zuru, Major General Muhammadu Sani Sami (rtd), where he commended the Royal father for his support to troops.

The statement added that Gen. Yahaya called on the traditional institution to work hand in gloves with the Nigerian Army and other. security agencies to defeat banditry.

Responding, the highly revered monarch of Zuru assured the COAS of his continuous support to restore normalcy in his domain.

McLaren’s battle back to glory: A strong recovery after a poor start…