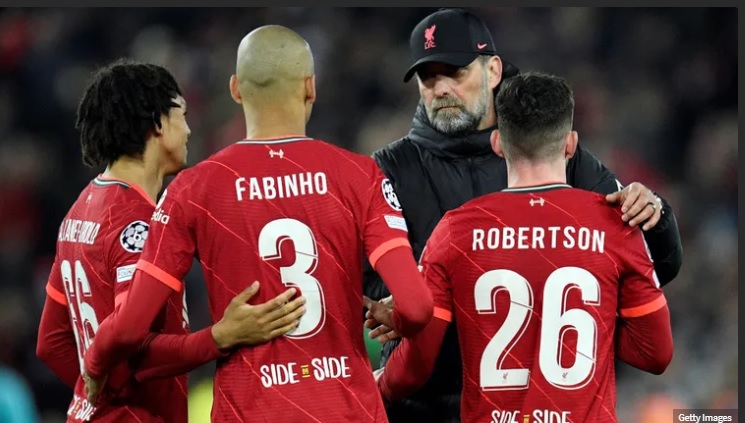 Jurgen Klopp said reaching his fourth Champions League final as a coach felt almost like a new experience as his Liverpool side came back from two goals down against Villarreal to secure a 5-2 aggregate win in their semi-final on Tuesday.

While the three-goal cushion may look comfortable, this was a test of Liverpool’s nerve and powers of recovery as an awful opening half by their standards saw their first-leg advantage wiped out by debut goals in the competition from Boulaye Dia and Francis Coquelin.
But the half-time introduction of £37.5m January signing Luis Diaz, who has reinvigorated 2022 for Klopp’s side, changed the game – aided by a poor goalkeeping performance from the hosts’ Geronimo Rulli.

Both Fabinho and Diaz’s goals went through Rulli’s legs, while the goalkeeper was beaten to the ball by Sadio Mane when he came charging out to leave the Senegal forward with an unguarded net to seal the win on the night.
“It feels like the first in 20 [years],” Klopp, who led Borussia Dortmund to the final of the competition in 2013 and Liverpool in 2018 and 2019, told BT Sport. “It’s outstanding, because we obviously made it a little tricky for ourselves, but we knew these kind of things could happen.”

Liverpool head to the final in Paris to face either Real Madrid or Manchester City, who play their second leg in Madrid on Wednesday with City holding a slender 4-3 lead on aggregate.

Klopp’s side were shocked by Villarreal’s aggressive man-marking in the first half which took them out of their own pressing game, and the coach conceded he struggled to find highlights from the opening 45 minutes to show his players.
“We knew what was wrong because it was obvious, but we didn’t have a situation to show them where we got it right,” Klopp explained.

“I said [to my staff] ‘find one where we do it well and we can show it’, and we come in and they said ‘no, we don’t have it’.”
The introduction of Colombia winger Diaz at the break seemed to liven up Liverpool’s attack.
“Obviously Luis, what a player he is, but it’s not about who came on, it was about how we started to play,” Klopp explained.

The 54-year-old coach said he had no preference for who his team would face in the final on May 28, saying “whoever it will be, it will be massive”.
Mohamed Salah admitted he would rather face Real Madrid than Manchester City in Paris in order to take revenge for Liverpool’s 3-1 loss to the Spanish side in the 2018 final in Kiev.

Salah left the field in tears when he was forced off with a shoulder injury in the first half of that game and said he would relish the opportunity to face Madrid again.

“I want to play Madrid, I have to be honest,” Salah told BT Sport. “City is a really tough team. We played against them a few times this season.

“But I think, if you ask me personally, I prefer Madrid, because we lost in the final [to them], so I want to play against them and hopefully we will win it.”

Salah, who provided the assist for Fabinho’s crucial goal early in the second half against Villarreal, felt Liverpool’s comeback in Spain underlined their strong mentality.
“It was tough in the first half but then we went to the dressing room. The gaffer talked and we talked to each other as well.

“That shows character and personality in the dressing room. It shows that we are a top team. That’s why we can strike back after losing 2-0 in the first half. I think it makes the win more exciting.”

Asked if he is motivated by the possibility of winning the Quadruple, he added: “For sure. Maybe not at the beginning of the season because I always focus on the Premier League and the Champions League but now we are close for everything, so why not?”

Liverpool’s hectic schedule continues as they host Tottenham in the Premier League on Saturday at 7.45pm knowing they cannot afford to slip up if they are to catch Manchester City.

The Champions League final takes place on May 28 at Saint-Denis’s Stade de France in Paris, against either Real Madrid or Manchester City.
(Skysport)