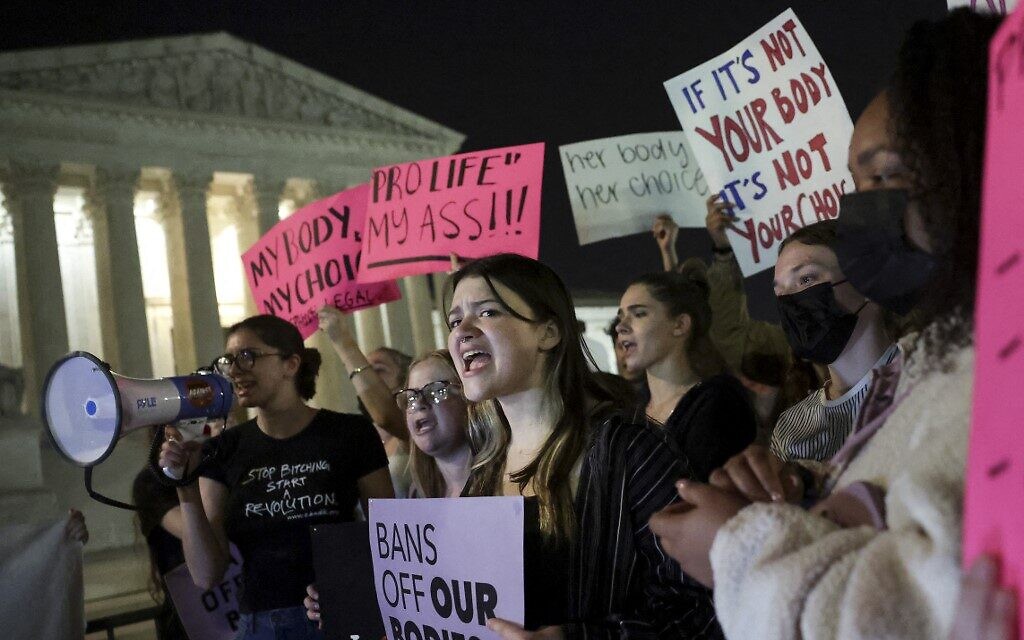 The Supreme Court looks poised to overturn a landmark ruling allowing abortion for women across the United States, according to Politico magazine.

The Washington, DC-based news outlet said an initial draft majority opinion written by Justice Samuel Alito that it had obtained showed the court had voted to strike down the 1973 Roe v Wade decision.
“Roe was egregiously wrong from the start,” Alito wrote in the opinion, which was circulated among the judges on February 10, 2022 and labelled as a “1st Draft” of the “Opinion of the Court”.

Four of the other Republican-appointed justices – Clarence Thomas, Neil Gorsuch, Brett Kavanaugh and Amy Coney Barrett – voted with Alito in the conference held among the justices after hearing oral arguments in December, and continued to support the opinion, Politico said.

After an initial vote among the justices following oral argument, one is assigned the majority opinion and writes a draft, which is then circulated among the judges.
Between the initial vote and the ruling being released, the vote alignment can change and a ruling only becomes final when it is published by the court.

“We hold that Roe and Casey must be overruled,” the draft added, referencing the 1992 case Planned Parenthood v Casey that affirmed Roe’s finding of a constitutional right to abortion services but allowed states to place some constraints on the practice. “It is time to heed the Constitution and return the issue of abortion to the people’s elected representatives.”

The draft opinion stems from a bid by Mississippi to revive its ban on abortion starting at 15 weeks of pregnancy, which had been blocked by lower courts.

The southern state had asked the justices to overturn Roe v Wade, as well as the 1992 Casey ruling.

‘An abomination’
In a joint statement, House speaker Nancy Pelosi and Senate Majority Leader Chuck Schumer said the court looked “poised to inflict the greatest restriction of rights in the past fifty years – not just on women but on all Americans”.
Rounding on the “Republican-appointed” members of the court the statement said a vote to overturn Roe v Wade “would go down as an abomination, one of the worst and most damaging decisions in modern history.”

New York Governor Kathy Hochul, also a Democrat, said the draft opinion was a “disgraceful attack” on women’s right to choose and said abortion would “always be” safe and accessible in New York.
Many Republicans hailed the draft ruling.

“The left continues its assault on the Supreme Court with an unprecedented breach of confidentiality, clearly meant to intimidate,” said Republican Senator Josh Hawley.

“I will say, if this is the Court’s opinion, it’s a heck of an opinion. Voluminously researched, tightly argued, and morally powerful.”

A number of Republican-controlled states are currently trying to restrict abortion rights, with Oklahoma the most recent.

“The Supreme Court’s confidential deliberation process is sacred & protects it from political interference,” said Republican Senator Rick Scott. “This breach shows that radical Democrats are working even harder to intimidate & undermine the Court. It was always their plan. The justices cannot be swayed by this attack.”

The leak is an unprecedented disclosure of a draft Supreme Court opinion. The Associated Press news agency said if verified it would mark a “shocking revelation of the high court’s secretive deliberation process”.

The Supreme Court and the White House declined to comment.
(AL JAZEERA AND NEWS AGENCIES)

Mali: Junta breaks off from defence accords with France