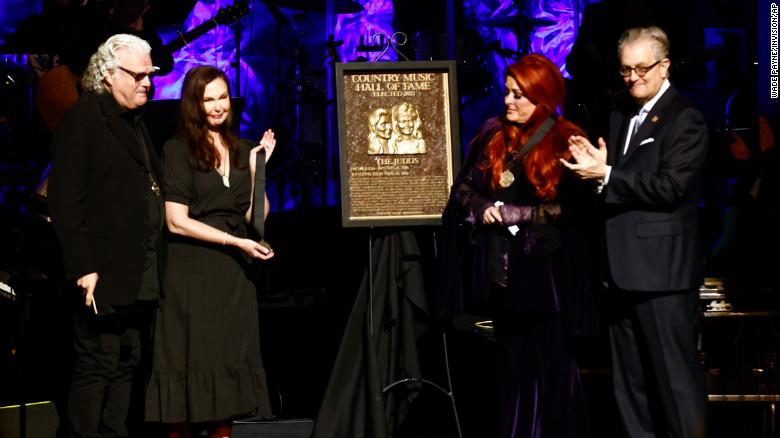 Naomi Judd’s daughters honored her during her induction into the Country Music Hall of Fame Sunday night, just one day after they announced her death.

During the ceremony, Wynonna Judd and Ashley Judd reflected on the difficulty of honoring their mother’s achievement so soon after losing her.

“I didn’t prepare anything tonight because I knew mom would probably talk the most,” Wynonna told the audience.
Wynonna and Naomi Judd performed for decades together as the mother-daughter singing duo The Judds.
“I’m gonna make this fast, because my heart’s broken, and I feel so blessed. It’s a very strange dynamic, to be this broken and this blessed,” she said.

“We will do so, with heavy hearts,” Young wrote.
Judd passed away at the age of 76, her daughters announced Saturday, hours before the country music legend was to be celebrated alongside Wynonna at the Nashville museum’s Medallion Ceremony.
In their announcements shared on Twitter, Wynonna and Ashley, an actress and activist, wrote that they “lost our beautiful mother to the disease of mental illness.”

“My mama loved you so much and she appreciated your love for her,” Ashley said of her mother through tears at Sunday’s ceremony. “I’m sorry that she couldn’t hang on until today. Your esteem for her and your regard for her really penetrated her heart, and it was your affection for her that did keep her going in these last years.”

Ashley Judd (right) hugs her sister Wynonna at the induction ceremony on Sunday.
“Though my heart’s broken, I will continue to sing, because that’s what we do,” Wynonna said, according to a report by the Tennessean. The sisters concluded their remarks by reciting Psalm 23 from the Bible, as members of the audience joined them.

A tweet on the Hall of Fame’s page announced the pre-ceremony “Red Carpet Experience,” scheduled for Sunday afternoon, had been canceled in light of Judd’s death.
Ray Charles, Eddie Bayers and Pete Drake were also inducted to the Hall of Fame during Sunday’s ceremony.

“We are navigating profound grief and know that as we loved her, she was loved by her public,” her daughters said when they announced Naomi’s death. “We are in unknown territory.”
Naomi Judd shared during a 2016 appearance on “Good Morning America” that she had been diagnosed with severe depression and anxiety. That same year, she wrote a book titled “River of Time: My Descent into Depression and How I Emerged with Hope” explaining her struggles.

In its announcement of the 2021 members-elect, the Hall of Fame credited Naomi and Wynonna Judd with helping “take country back to its roots in the 1980s with lean, tuneful songs influenced by traditional folk music, acoustic blues, and family harmony acts.”

The mother-daughter duo began performing together as a professional act in the early 1980s, soon producing a string of major hits like “Mama He’s Crazy” and “Love Can Build a Bridge,” and selling more than 20 million records. Between 1984 and 1991, The Judds won five Grammys and had 14 No. 1 singles, per the Hall of Fame.
While Wynonna sang lead, “Naomi provided harmony, wit, and a sashaying stage presence that engaged audiences,” the Hall of Fame said.
The announcement was updated after the news Judd had died, noting, “The museum, the Judds’ family and fans, and the entertainment industry mourn her sudden passing.”
The Judds performed together publicly for the first time in years at the CMT Music Awards early last month, singing “Love Can Build a Bridge.” Judd’s death also came soon after the announcement of The Judds’ 10-date “Final Tour,” which was scheduled to begin in September.
(CNN)