Chelsea: Lukaku must be sold this summer 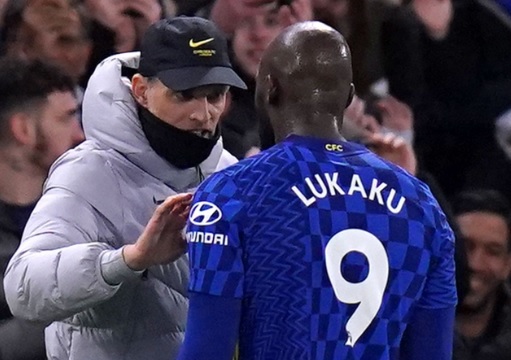 In the moments after Thomas Tuchel had made his final substitutions of the afternoon at Goodison Park, the broadcasters picked out Romelu Lukaku sitting on the Chelsea bench.
Motionless and expressionless, the Belgium international could only watch on, knowing he would not be involved against his former club, Everton.

Though Chelsea found themselves 1-0 down against the relegation-threatened Toffees after Richarlison had opened the scoring early in the second half, Tuchel decided against calling upon his £100 million ($136m) club-record signing in his pursuit of an equaliser.
Instead he threw on Christian Pulisic and Hakim Ziyech, the wide forwards joining fellow substitute Mateo Kovacic on the pitch after the midfielder replaced Jorginho at half time.

Neither Pulisic or Ziyech could muster much in their 30 minutes on the pitch, however, as Chelsea slipped to a third defeat in their last six Premier League matches.
“We had to take Jorgi off and I only had three changes,” was Tuchel’s short explanation of leaving Lukaku in reserve when speaking to reporters post-match, though such an excuse would hardly have been believable at the start of season.

After triumphantly leading Inter to the Scudetto in 2021, the reigning Serie A Player of the Year was expected to be a difference-maker for a Chelsea side when they faced deep, low blocks, as they did on Sunday.

Instead, he is nothing more than a bit-part player at Stamford Bridge.

Of Lukaku’s last nine appearances, only one has come from the start, while he is yet to score a league goal in 2022.

The last time he completed 90 minutes came all the way back in February, in the infamous game against Crystal Palace that saw him break the record for the fewest touches recorded by an outfield player in a Premier League game (seven) since Opta records began.

Kai Havertz replaced him in the line up following that game at Selhurst Park, and scored eight in 12 games to justify his selection, but the Germany international has gone off the boil of late, failing to score in his last six.

He was clearly rattled against Everton by Yerry Mina’s attempts to wind him up, and throwing on the more experienced and physically imposing Lukaku might have been the way for Tuchel to go.
But instead he kept his tracksuit on, the £325,000 wage he earned over the past seven days done so solely in training sessions.

That is not a sustainable place for Chelsea to be in, particularly given their ownership situation, and their relationship with Lukaku is one they need to get out of sooner rather than later.

A parting of ways this summer would be the best for all parties, too, with GOAL having learned that the player is unhappy with his lack of game time under Tuchel and is exploring other options.

A return to Inter has been touted in many quarters as his preferred option in Serie A.

Lukaku’s preference, however, would be to remain at Chelsea and make his second spell at the club more successful than his first, but he ultimately wants the support from the coaching staff to allow him to flourish.
That seems unlikely to be forthcoming while Tuchel remains in charge, though, with the German coach unwilling to adapt his style of football to incorporate Lukaku.

Selling Lukaku so soon after he returned to the club would be a bitter pill for Chelsea to swallow, and they would only receive a fraction of what they paid for the 28-year-old if they were to sell this summer.

But with the situation unlikely to change in Chelsea’s final five games of the season, the time has come for a difficult decision to be made.
(GOAL)