Menu
Home Sports The Awaited Battle for The Undisputed
Sports

The Awaited Battle for The Undisputed 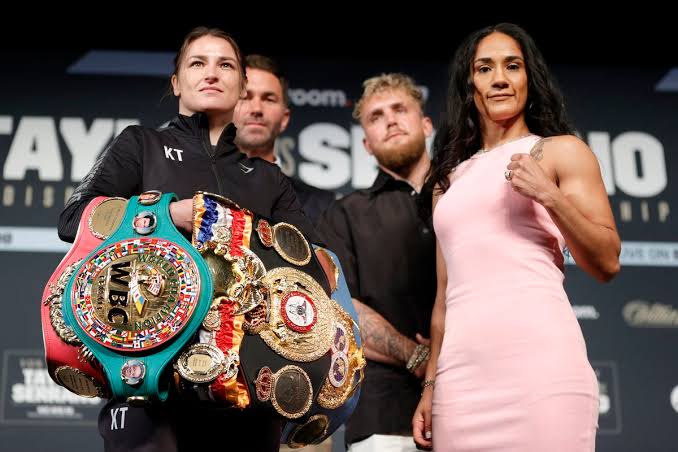 Katie Taylor and Amanda Serrano faced off for the final time ahead of their undisputed women’s lightweight contest in MSG New York this weekend.

They both cut formidable figures as the two tipped the scales in peak condition at an electric weigh-in ahead of today’s undisputed clash at Madison Square Garden.

The undefeated Taylor (20-0) defends her WBA, WBC, IBF, and WBO lightweight titles against a seven-weight world champion in Serrano, the volume of belts on display requiring the arms of three different people on stage.

The two had been serenaded by all and sundry. Even WWE superstars Becky Lynch and Bianca Belair. Two years ago, the pandemic delayed the fight. Taylor, five-time world champion and six-time European Championship gold medalist, insisted that she will leave with her belts at the end of the bout.

Should she win, Serrano will become the first fighter to beat decorated amateur Taylor in the professional ranks. experienced pro-style fighter and she does take the power with her into every weight class she’s been in.

And also, she’s a southpaw. I feel these are interesting factors in this fight. Katie isn’t fast and will start fast and probably be ahead by half-time. There isn’t a type of person or fighting style that Katie hasn’t fought.

Arguably the biggest women’s boxing fight ever. Since we still await Shields vs Savannah to happen. Both women are making their first appearance in the ring this year after each picking up three wins in 2021.

Thanks to the promotion of Eddie Hearn and Jake Paul

both women are set to earn seven-figure paydays and pay-per-view bonuses for the clash.

The WBC has even released a new belt for the fight, in a similar fashion to the ‘Union Belt’ they made for Tyson Fury vs Dillian Whyte. Taylor and Serrano will fight for the ‘Celtic-Boruica belt’ which pays homage to their respective nations of Ireland and Puerto Rico.

The Full Card for Katie Taylor vs. Amanda Serrano will be as follows: