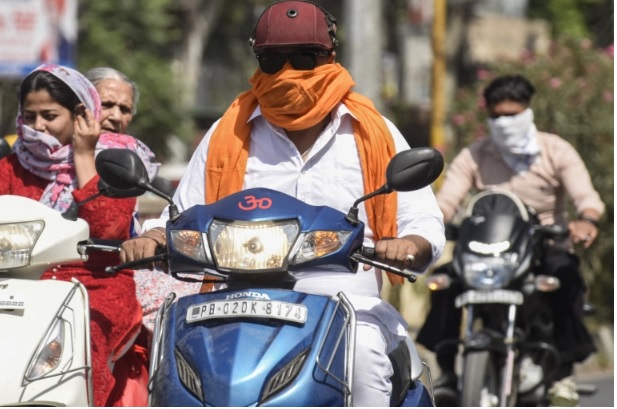 Millions of Indians have been struggling under “severe heatwave conditions” for days and it is expected the searing temperatures will continue for some time.

Temperatures breached 45 degrees Celsius (113 Fahrenheit) in at least nine Indian cities, reports said on Friday as the government scrambled to ensure power supply to them.
The main summer months in India – April, May and June – are always excruciatingly hot in most parts of the country, before monsoon rains bring cooler temperatures.

But the heatwave has arrived early and grown particularly intense in the past decade.
Heatwaves have killed more than 6,500 people in India since 2010, and scientists say climate change is making them harsher and more frequent across South Asia.

“This is the first time I have seen such horrible weather in April. Usually, we’re prepared for this in May and onwards,” said 30-year-old Somya Mehra, as she and her family thirstily searched for cold drinks in New Delhi.

In the capital, temperatures have soared past 40C (104F) for several days and are forecast to linger around 44C until Sunday, with peak summer heat still to come.
‘Hottest summer ever’
India’s weather department on Friday warned of “severe heat wave conditions” in the northern, northwestern and eastern areas of the country as the vast nation continues to reel under what local media reports said was its “hottest summer ever”.
As extreme heat continued to scorch large swaths of India, offering no reprieve after its hottest March on record, it triggered a warning by Prime Minister Narendra Modi of fire risks.

“Temperatures are rising rapidly in the country, and rising much earlier than usual,” Modi told the heads of India’s state governments in an online conference on Wednesday.

As Modi spoke, firefighters were struggling to extinguish a large blaze at the Bhalswa landfill site, a hillock rising above the northwest edge of New Delhi.
“We are seeing increasing incidents of fires in various places – in jungles, important buildings and in hospitals – in the past few days,” Modi said.
Among the worst hit have been the typically humid eastern Indian states, which saw temperatures above 43C on Wednesday.

Schools in the eastern state of Odisha have been shut for a week while neighbouring West Bengal has announced summer school breaks from next week, days ahead of schedule.

Maximum temperatures recorded in six West Bengal districts were at least five degrees Celsius above normal, officials said, with a lack of rain in state capital Kolkata adding to its worries.
“Rarely it happens that nearly the whole country is reeling under (a) heatwave,” said hydroclimatologist Arpita Mondal at the Indian Institute of Technology Bombay, on the coast of Maharashtra, where she said the heat was “unbearable”.

Climate change is “beyond doubt” a contributing factor to the weather extremes, Mondal said.

In February, a report by the Intergovernmental Panel on Climate Change warned of India’s vulnerabilities to extreme heat. For example, at 1.5C of warming above pre-industrial temperatures, the West Bengal capital of Kolkata could once a year see conditions match that of the 2015 heatwave, when temperatures hit 44C and thousands died across the country.

Mondal’s research has found that urban pollution may also play a role, with black carbon and dust absorbing sunlight and leading to greater heating of India’s cities.
Amid scorching temperatures, power cuts in five states, including Rajasthan and Haryana in the north and Andhra Pradesh in the south, were the worst in more than six years, according to a Reuters news agency’s analysis of data from the federal grid regulator POSOCO.
Rajasthan, Gujarat and Andhra Pradesh states this week imposed power cuts on factories as consumption for air conditioning and fans skyrocketed.

The leap in power demand has left India scrambling for coal, the dominant fuel used in electricity generation in the country.

Coal inventories are at the lowest pre-summer levels in at least nine years, Reuters said.
Amid a shortage of trains to transport coal to power plants, the government on Friday cancelled dozens of passenger trains to prioritise the supply.
While heat risks lives and livelihoods in India, the real danger comes when high temperatures mix with high humidity, making it difficult for people to cool down through sweating.

Such conditions are measured by “wet bulb temperatures” which record the reading of a thermometer wrapped in a wet cloth.

Liz Bentley is chief executive at the Royal Meteorological Society and is a professor of meteorology at the University of Reading. She says the heat wave is affecting vast areas of several Indian states and it will take a heavy toll on the health of the population.

“Just living in heat like this is a danger to health. So many people, there’s about 1.4 billion people in India who live in the rural parts of India and have no access to air conditioning or cooling systems, and they’re sleeping outside to try and keep cool,” she said.

“But even temperatures overnight are excessive. And the stress that that puts on our bodies, the ability for our bodies to just work all the time to try and cool us down is obviously causing a lot of health problems.”
(News Agencies)