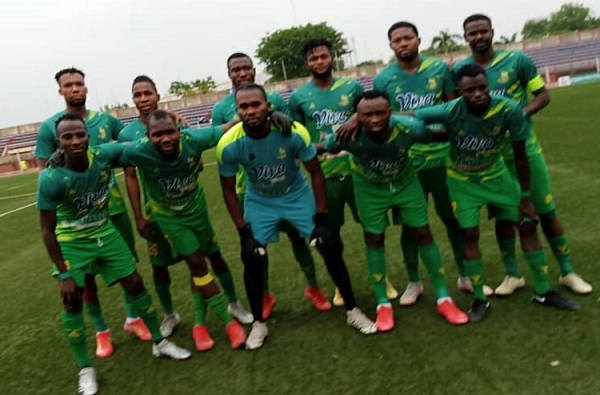 The newly signed striker, Jerry Alex’s strike in the 19 minutes gav the only goal that Pillars Fc needed to pocket three points in the encounter.

Jerry received a pass from Fahad Usman inside the box and without wasting time send the ball back to the net.

Speaking shortly after the match, Chief Coach of Kano Pillars football club, Ibrahim A. Musa thanked God for the victory and commended the players for a job well done.

Coach Ibrahim said with the result, their hope of escaping from the relegation gave them a morale booster.

“As I’m speaking to you with our current position in the league, we surrender from winning the title and getting a continental ticket; what we are looking for now is to ensure that we maintain our position at the end of the season,” Coach Ibrahim said.

He expressed dismay at the attitude of some unpatriotic fans that distracted their match with the Katsina United football club last week, a situation that led to their banishment to MKO Abiola Stadium Abuja which he said they missed the support of their teeming supporters in Kano.

The scorer of the goal, Jerry Alex who doubles as the Man of the match expressed his appreciation for scoring the goal that give them the victory.

Alex said he joined Pillars football club in the second stanza in order to give his contribution to projecting the image of the club.

He said the success is a collective effort of both players and technical crew and reaffirmed his determination to score more goals in the subsequent matches.

Kano central and north senatorial zones, Senators Ibrahim Shekarau and Barau Jibrin were among those who watched the match. They donated N3.4 million to the players and technical crew of the club and charged them to remain good ambassadors to the people of Kano state.

AbdulRazaq excited as Over 1,900 teachers undergo training for KwaraLEARN program