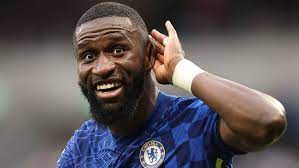 Antonio Rudiger has decided to leave Chelsea at the end of the season with the defender set to join Real Madrid this summer on a free transfer.
Jorginho admits Chelsea will “miss” Antonio Rudiger after Spanish football journalist Alvaro Montero told Sky Sports News on Tuesday the defender’s move to Real Madrid is a “done deal”.
The 29-year-old’s current contract expires at the end of the season and he now looks set to join Real Madrid on a free transfer.
Montero told Sky Sports News: “I asked someone inside the club [Real Madrid] yesterday and he started laughing and said, ‘Yes, it’s a done deal’.
“Things can change but there is a deal between the player and the club.
“I believe when he scored at the Bernabeu [for Chelsea in the Champions League this month] he was already a Real Madrid player.
“It was his desire and if nothing strange happens he’s going to play for Real Madrid next season.”
Rudiger has been a key part of Chelsea’s success in recent seasons having won five trophies with the club, including last year’s Champions League.
Chelsea team-mate Jorginho believes the German will be a big loss for the team if he was to leave Stamford Bridge at the end of the season.

The Italian told Sky Sports News: “He’s been here a long time so if he leaves then we’re going to miss him.

“He’s a big personality and he’s helped us a lot. We’ve had amazing times here; he’s a good friend of mine and of course if he leaves everyone at the club will miss him, not just me.”

Asked what he will miss the most about Rudiger, the 30-year-old laughed: “His craziness. He makes me laugh a lot; all of his jokes and laughs we’ve had together – that’s the nice part.”
Jules Kounde has paved the way for a move to Chelsea this summer by telling Sevilla he remains determined to leave the Spanish club, the PA news agency understands.

Chelsea thought they had a deal wrapped up, only for Sevilla to dig in at the last with the switch falling through just before the summer’s transfer window closed.

But with Chelsea also set to lose centre-back Andreas Christensen this summer on a free transfer, with Barcelona looking a likely destination for the Dane, the Blues will be in the market for central defenders.
Chelsea cannot make any new signings or complete fresh contract terms with existing players under the club’s UK Government sanctions.

The club’s sale should be completes next month however, allowing Chelsea bosses to revert to business as usual.

Chelsea have lost clear ground in the transfer market due to the club’s licensing constraints as a result of the sanctions on owner Roman Abramovich.

But Stamford Bridge chiefs still hope to be able to compete in the summer’s transfer window, leaving Kounde among the club’s top targets.

Chelsea have never let their interest in the nine-cap France defender wane and will be expected to step up efforts to recruit the 23-year-old once the club’s sale is complete.
News that Rudiger is leaving Chelsea is far from a shock. This was not a bolt out of the blue for Blues boss Tuchel.

Sky Sports News has been reporting since the turn of the year that the German defender has been speaking to other clubs, including the likes of Real Madrid, Barcelona and Bayern Munich, over a pre-contract agreement which would result in a free transfer.

The problem Tuchel now faces is how to replace his compatriot – if he can. There’s a race against time for Chelsea to officially complete their takeover by the time the summer transfer window starts. New owners need to be decided, Government approval is needed, and that’s before the conversation about what funds are available even begins.
Finding a player that can match Rudiger’s standards over the last 18 months will not be easy.

The centre-back was brought back into the Chelsea starting line-up when Tuchel arrived at Stamford Bridge in January 2021, after enduring a fraught relationship with former boss Frank Lampard – who even went as far as to exile him.
Since Rudiger came back into the fold, Chelsea have won the Champions League, UEFA Super Cup and Club World Cup, victories they owe in no small part to defensive solidity.

The security Rudiger provides is evidenced by the statistic that Chelsea have conceded twice as many goals (1.4) with him out of the team, compared to when he plays (0.7).

Against West Ham on Sunday, Tuchel’s Chelsea restricted their opponents to zero shots on target in the game – but that does not tell the whole story.
Centre-backs Cesar Azpilicueta and Trevoh Chalobah – both used in a makeshift back three after Andreas Christensen was injured in the warm-up – looked sloppy in possession in defensive transitions.

Both had their pockets picked by Said Benrahma in the space of a matter of moments, and only defensive astuteness from goalkeeper Edouard Mendy and Thiago Silva bailed the pair out. How long the latter – 37 years of age – can go on will be a concern, although there are few signs of his powers diminishing.

Tuchel summed up the hole Rudiger will leave behind: “It will be incredibly difficult because Toni is what he is: a big personality, a big leader. He takes fear away and gives confidence when he’s next to you, and between 50 or 60 matches [he plays] with an incredible level of consistency.”
(Skysport)