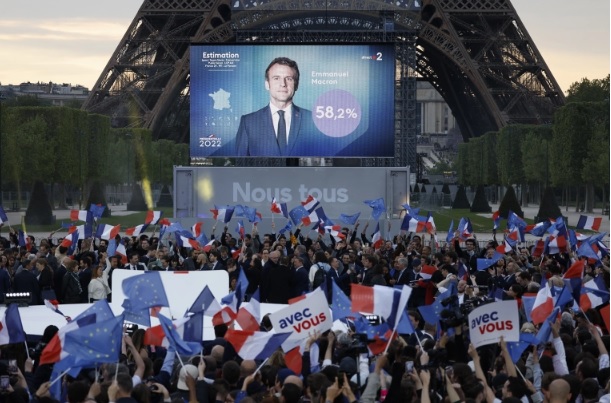 French President Emmanuel Macron has won a second term in office, defeating his far-right rival Marine Le Pen by a comfortable margin in a runoff election.

His supporters erupted with joy on Sunday as the results appeared on a giant screen at the Champ de Mars Park by the Eiffel tower. Leaders in Berlin, Brussels, London and beyond welcomed his defeat of the nationalist, eurosceptic Le Pen.
With nearly all votes counted, Macron was on course for a solid 58.6 percent of the vote, according to interior ministry figures. Le Pen, the candidate of the far-right National Rally party (Rassemblement National or RN), received 41.4 percent of the votes, the highest in her last three unsuccessful presidential bids.

In his victory speech, Macron acknowledged that many had only voted for him only to keep Le Pen out and promised to address the sense of many French that their living standards are slipping.
“Many in this country voted for me not because they support my ideas but to keep out those of the far-right. I want to thank them and know I owe them a debt in the years to come,” the 44-year-old said.
He also promised to address the “anger and the disagreements” that led to many French voters choosing the extreme right, saying “This will be my responsibility and that of those around me.”

“No one in France will be left by the wayside,” he continued, pledging to be a “president for all”.

Macron is the first French president to win a second term for two decades, but Le Pen’s result also marks the closest the far-right has ever come to taking power in France and has revealed a deeply divided nation.

Le Pen, who at one stage of the campaign had trailed Macron by just a few points in opinion polls, was quick to concede defeat. But she hailed her result as a “brilliant victory” and vowed to keep up the fight with parliamentary elections in June.
Breaking through the threshold of 40 percent of the vote is unprecedented for the French far-right. Le Pen was beaten 66 percent to 34 percent by Macron in 2017 and her father Jean Marie Le Pen, who founded her party, got less than 20 percent against Jacques Chirac in 2002.
“In this defeat, I can’t help but feel a form of hope”, the 53-year-old told supporters chanting “Marine! Marine!”

“I will never abandon the French,” she added.
Later on Sunday night, several hundred demonstrators from ultra-left groups took to the streets in some French cities to protest Macron’s re-election and Le Pen’s score. Police used tear gas to disperse gatherings in Paris and the western city of Rennes.

Final figures from Sunday’s vote are due on Monday.

Pierre Haski, a veteran political commentator, said June’s legislative elections – commonly referred to as the third round – will be the new test for the political landscape in France, especially as support for traditional parties has drastically shrunk.

“You have three political forces,” he told Al Jazeera. “You have Macron’s centre, a major chunk of the political spectrum. You have Marine Le Pen, who has increased the number of votes in this election compared to previous ones so she’s a strong contender on the right. Then you have [leftist] Jean-Luc Melenchon, who did well in the first round and came in third and wants to take revenge in the parliamentary elections.
“The challenge for Macron is to have a majority because if he doesn’t, he will be forced into a different political orientation between the president and the prime minister, and that’s a source of tension and difficulties.”
According to the exit polls by Franceinfo, an estimated 28.2 percent of the electorate did not cast their votes.

Some 6.35 percent of voters in the election meanwhile voted for neither candidate in blank ballots while 2.25 percent spoilt their papers.

In a speech on Sunday evening, Melenchon said the campaign for legislative elections in June starts now.
Melenchon, who united the first-round left-wing vote around him and has already talked about himself as a future prime minister, urged voters who are unhappy with the system not to give up.

“The voters have spoken, Le Pen has been beaten, France clearly refused to entrust its future to her. Macron’s election is the worst result of the fifth republic. He swims in an ocean of abstentions and spoiled ballots,” Melenchon said.

“The political situation ahead of parliamentary elections forces us to act … the nationalist bloc needs to unite, nationalist movements must join forces,” said Zemmour, who was also a candidate in the first round of the vote but failed to make it to the second round.
Outside France, Macron’s victory was hailed as a reprieve for mainstream politics rocked in recent years by Britain’s exit from the European Union, the 2016 election of Donald Trump and the rise of a new generation of nationalist leaders.
“Bravo Emmanuel,” European Council President Charles Michel, wrote on Twitter. “In this turbulent period, we need a solid Europe and a France totally committed to a more sovereign and more strategic European Union.”
“Together we will make France and Europe advance,” tweeted European Commission President Ursula von der Leyen.

Italian Premier Mario Draghi hailed Macron’s victory as “splendid news for all of Europe” and a boost to the EU “being a protagonist in the greatest challenges of our times, starting with the war in Ukraine”.

France has played a leading role in international efforts to punish Russia with sanctions and is supplying weapons to Ukraine.

“Congratulations to the President and a true friend @EmmanuelMacron on the election victory,” Ukraine President Volodymyr Zelenskiy wrote on his Twitter account in early hours on Monday.
British Prime Minister Boris Johnson also congratulated Macron on his re-election.

“France is one of our closest and most important allies,” Johnson wrote on Twitter. “I look forward to continuing to work together on the issues which matter most to our two countries and to the world.”