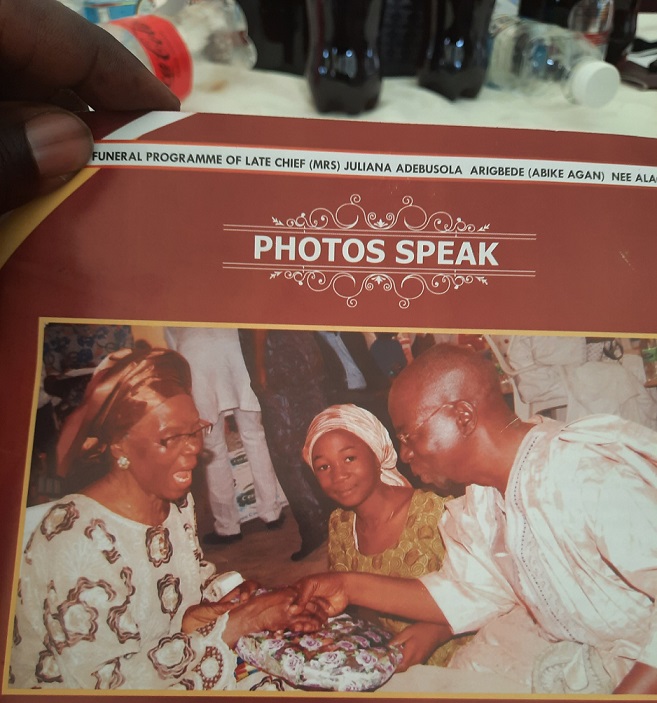 In 2012, Mama celebrated both her 76th birthday and 50th wedding anniversary to Chief Joseph Adedayo Arigbede. Educationist parents of my good friend, indeed a brother since our raging 20s, their eldest child, Segun. Brother to Bunmi, Femi, Bolaji, Shola, and Wole.

Little Janet, now an Architecture undergraduate was at the center of my reunion with Mama on that occasion.

So, you could imagine my pleasant surprise as that encounter was part of the photo splash included in the funeral program at her well-attended obsequies at Igasi-Akoko, Ondo State on Friday, April 22, 2022.

As I sat back to reflect on that rural ambiance, it deeply occurred to me that in all our various families, irrespective of background, North, South, Christian, or Muslim, we are so reminiscent of one of the world’s most resilient horticultural product the, Yamaki Pine of Bonsai.

A born teacher, a career teacher that married a lifelong teacher.

Mama was adroit in teaching, learning, and character.

The passing away of Mama has brought to a close the life of a dedicated, dutiful, and fiercely loyal homemaker. A humble public servant who served her nation without blemish. Indeed, a faithful forerunner who has run a good race as she awaits the garlands of her Creator.

Mama was a syllabus of contrasts;

A highly groomed and well-learned lady, but plain. Downright serious and stern, but quietly humorous. An accomplished individual, but down to earth.

A thoroughly detribalized Nigerian, a well-principled person that abhorred any form of religious or ethnic exhibitionism, never shrinking from equitably engaging with all and sundry.

Avoiding the allure of any self-advertising gambit, she availed the quantum of her enormous talent, experience, and vast knowledge to carefully nurture with a delicate touch a steadily growing Arigbede family. An emerging clan.

A fitting balance to Baba’s equation as his capable copilot. His, “jewel of inestimable value.”

Both laid the building blocks of a great family, incorporating relations far and wide, never relenting in active participation in ecclesiastical activities including the hosting of church services in their humble abode at Borno Avenue, Kano back in the day.

You don’t have to be Mama’s offspring to embrace the truism that in her eventful life and interesting times from the 390-year-old Bonsai tree that outlived Hiroshima;

“On August 6, 1945, at a quarter-past 8 a.m., bonsai master Masaru Yamaki was inside his home when glass fragments hurtled past him, cutting his skin after a strong force blew out the windows of the house. The U.S. B-29 bomber called the “Enola Gay” had just dropped the world’s first atomic bomb over the city of Hiroshima, at a site just two miles from the Yamaki home.

The bomb wiped out 90 percent of the city, killing 80,000 Japanese immediately and eventually contributing to the death of at least 100,000 more. But besides some minor glass-related injuries, Yamaki and his family survived the blast, as did their prized bonsai trees, which were protected by a tall wall surrounding the outdoor nursery.

For 25 years, one of those trees sat near the entrance of the National Bonsai and Penjing Museum at the United States National Arboretum in Washington D.C., its impressive life story largely unknown. When Yamaki donated the now 390-year-old white pine bonsai tree to be part of 53 bonsais gifted by the Nippon Bosnai Association to the United States for its bicentennial celebration in 1976, all that was really known as the tree’s donor. Its secret would remain hidden until 2001 when two of Yamaki’s grandsons made an unannounced visit to the Arboretum in search of the tree they had heard about their entire lives.

Through a Japanese translator, the grandsons told the story of their grandfather and the tree’s miraculous survival. Two years later, Takako Yamaki Tatsuzaki, Yamaki’s daughter also visited the museum hoping to see her father’s tree.

The museum and the Yamaki family maintain a friendly relationship and it is due to these visits that the curators know the precious value of the Yamaki Pine.

‘After going through what the family had gone through, to even donate one was pretty special, and to donate this one was even more special,’ says Jack Sustic, curator of the Bonsai and Penjing Museum. Yamaki’s donation of this tree, which had been in his family for at least six generations, is a symbol of the amicable relationship that emerged between the countries in the years following World War II.”

Every family is quintessentially Bonsai. A Yamaki Pine of sorts.

Mama was reminiscent of that kind of particular mastery required to cultivate and lovingly nurture a family with utmost care and singular devotion.

Therefore, her demise remarkably signifies the iconic dawn for a new chapter and the monumental beginning of yet another chapter for the Arigbedes. Indeed, Igasi.

So, her funeral is primarily a contemplation of the pleasant exercise of the enormous effort and ingenuity she applied in her ever-welcoming home, with her dear husband, children, and grandchildren, near and far relations including friends and well-wishers of the family.

She was such an epitome of exemplary humility, stark contingency, and simplistic determinism, she is survived by Baba, a wonderful nest of children, and an ever-growing brood of grandchildren. Her funeral is truly a celebration of life. A labor of love.

Yours truly, hugely benefited from her enormous reservoir of counsel and admonition. We had a connection. She was always there for me.

May her gentle soul rest in peace.