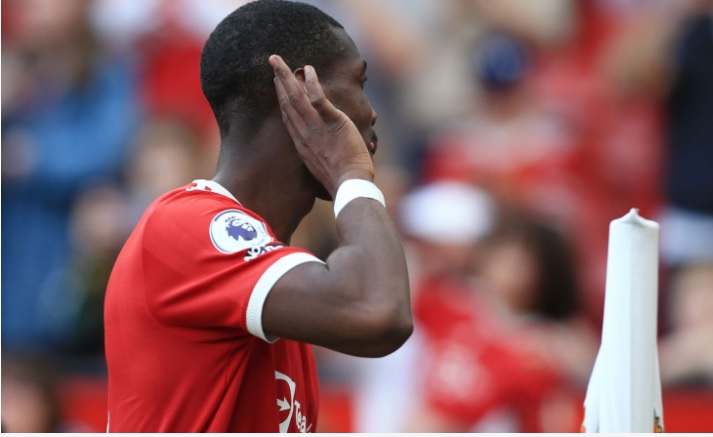 Paul Pogba picked up an injury in Man Utd’s 4-0 loss at Liverpool on Tuesday and Ralf Rangnick revealed he is facing four weeks on the sidelines; “I don’t think it is very likely he will be able to play again,” said the manager; Pogba’s contract expires at the end of the season
Ralf Rangnick has said Paul Pogba is unlikely to feature again this season, raising the prospect he has played his last game for Manchester United ahead of his contract expiring at the end of the season.
Pogba was forced off in the early stages of United’s 4-0 drubbing at the hands of Liverpool at Anfield on Tuesday, and Rangnick revealed the France midfielder faces at least four weeks on the sidelines.
United’s final game of the season is at Crystal Palace on May 22, meaning the France international faces ending his six-year spell at Old Trafford with a whimper.
Ahead of United’s trip to Arsenal on Saturday, Rangnick revealed: “Paul, as it seems after the scan we did, it’s very unlikely he will play until the end of the season.

“The doctor told me it will take four weeks minimum for him to recover. Since the last game is the end of May, I don’t think it is very likely he will be able to play again.”
There was better news for United ahead of their game at Arsenal – which could have huge ramifications on both sides’ chances of finishing in the top four – with Cristiano Ronaldo available to return to the team.

The 37-year-old had been given leave following the death of his newborn son, but he returned to training earlier this week and Rangnick said he is in contention to feature at the Emirates.
United are currently sixth in the Premier League, three points behind Arsenal and Tottenham having played a game more than their top-four rivals.
Rangnick gave his backing to the appointment of Erik ten Hag, who will leave Ajax to succeed the German as United’s manager in the summer.

The United interim said he provided positive feedback to United’s board regarding Ten Hag, and urged the club to give the 52-year-old time to “mould” his own team at Old Trafford.

“We don’t know each other, we haven’t met as yet in person,” Rangnick said of his successor. “But from what I’ve seen of him, both at Bayern Munich when he was the U23 coach and at Ajax now, I like his football.

“I am pretty positive that with a full pre-season, with having the chance to build and mould his own staff and also a new team – it is obvious we will have a new team – we will see a different team and an improvement on the pitch.

“I knew that Erik was one of the candidates the board spoke to. Obviously I told them, at least from what I had seen and know from people who have worked with Erik, that I think he would be a good choice.”

However, Rangnick was less forthcoming on his own future at United. The 63-year-old is set to take up a consultancy role at Old Trafford this summer, but he said he and the club “haven’t had time” to discuss what his role will involve.

Rangnick also reiterated his assertion that there will be a “rebuild” at Old Trafford following Ten Hag’s appointment, adding he is prepared to pass on his assessment of the United squad to the new manager.
“It’s obvious that there are quite a few players whose contracts are expiring,” explained Rangnick. “There might be a few others who, although they still have contracts, are already on loan and want to still be on loan or leave the club.

“It will be a significant change and rebuild, that’s clear, but how many players and which positions? As I said, I haven’t spoken to Erik yet, but if he asks me my opinion I’m obviously ready and willing to speak with him about my experience.

“On the other hand, he might also have his own ideas. It’s not only three of four new players, it’s obvious, bearing in my mind how many players’ contracts are expiring.”
Rangnick gave no indication of whether Harry Maguire would feature against Arsenal but said the whole club is behind him after the united captain received a bomb threat to his home on Thursday.

Cheshire Police confirmed “no suspicious items” were found at the home of Maguire, who lives with his fiancee Fern Hawkins and their two young children, and Rangnick offered his sympathies to the England defender after his “terrible experience”.

The interim manager said: “I haven’t seen him because I only got to know about this terrible thing yesterday afternoon. Since then I haven’t been able to speak with him.

“But again, this is another bad sign of the crazy world we are living in. I am very sorry for Harry that he has that terrible experience.

“He knows that we’re all behind him, the club is behind him, his team-mates. But it’s sad that crazy things like that happen.”
Manchester United’s record goalscorer Wayne Rooney believes Ten Hag will need to be given “two to three years” to get the club challenging for the Premier League title.

“It’s probably been a bit rushed in terms of the [Ten Hag] announcement,” the Derby County manager said at his Friday pre-match press conference. “I’m sure they’ve known what they were doing but in terms of what’s happened over the last few weeks, they’ve wanted to get some positive news out and I’m sure that’s the case.

“For a club of that size it’s a difficult challenge at any time but certainly now, it’s an extremely tough challenge for the new manager. I’m sure he knows what he’s walking into it and he knows it needs a big rebuild.

“It’s important he gets time to build a squad which is capable of challenging Man City, Liverpool, Chelsea and Tottenham, who I think will come good under [Antonio] Conte.

“I think he needs two or three years to make sure he gets the right people in place to go and challenge for the Premier League.”

Rooney also backed the club’s decision to hire the Dutchman despite the former England captain telling Monday Night Football earlier this month that he wanted Mauricio Pochettino to become the next manager.
“I’m sure they’ve done their homework,” Rooney said. “That was an opinion of mine [that United should appoint Pochettino].

“In fairness, I don’t know the new manager they’ve appointed very well. I’ve seen Pochettino work in the Premier League but I know they’ve done a lot of homework on who they want to bring in and I’m sure they feel they’ve got the right appointment for the club and how they want to move forward.

“I think it’s a good thing for the club they’ve given him a bit of time to rebuild the squad and maybe some issues in the background as well.

“I think it’s a positive step for the club and I’m looking forward to seeing how it develops over the next couple of years.”
(Skysport)

Davido reveals he is in a relationship