G20: Officials walk out of G20 meeting over Russia’s participation 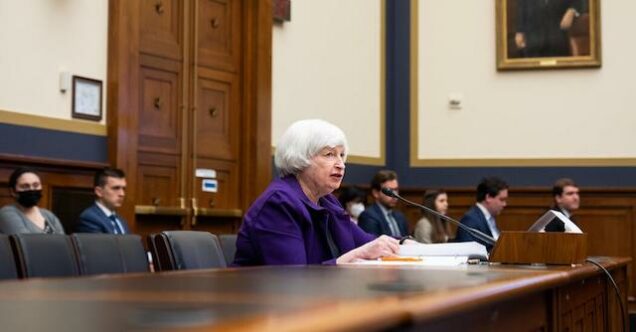 US and Ukraine boycotts Russia at the G20 meeting

Top finance officials from the United States, Canada and the United Kingdom have walked out of a meeting of the Group of 20 major economies (G20) in protest of Russia’s continued invasion of Ukraine.

Britain’s Finance Minister Rishi Sunak said on Wednesday that British, US and Canadian officials left the G20 meeting in Washington, DC as Russian delegates spoke
“We are united in our condemnation of Russia’s war against Ukraine and will push for stronger international coordination to punish Russia,” Sunak wrote on Twitter.

Ukrainian officials in attendance also walked out of the meeting of top finance officials from the world’s 20 largest economies, a source familiar with the meeting told the Reuters news agency.
The incident came amid the International Monetary Fund and World Bank spring meetings, in which finance heads gather to tackle the world’s most pressing issues.

The brutal impact of Russia’s war in Ukraine, which began in late February and this week has shifted to the country’s eastern Donbas region, has taken centre stage.
US Treasury officials said earlier this week that Treasury Secretary Janet Yellen would try to avoid contact with Russian officials who plan to attend some G20 events virtually.

US President Joe Biden has said that Russia should not remain a member of the G20, a position echoed by Canadian Finance Minister and Deputy Prime Minister Chrystia Freeland, who walked out of Wednesday’s meeting.

“This week’s meetings in Washington are about supporting the world economy – and Russia’s illegal invasion of Ukraine is a grave threat to the global economy. Russia should not be participating or included in these meetings,” she tweeted.

White House press secretary Jen Psaki expressed support for the walkout, saying it was “an indication of the fact that [Russian President Vladimir] Putin and Russia have become a pariah on the global stage”.

“The [US] president and Secretary Yellen have both said we can’t have business as usual at the G20 or in a lot of these international forums as it relates to Russia,” Psaki told reporters during a news conference on Wednesday afternoon.
Russian Deputy Finance Minister Timur Maksimov attended Wednesday’s meeting in person, while Russian Finance Minister Anton Siluanov and Russia’s central bank governor joined virtually, another source told Reuters.

Russia’s finance ministry did not mention the walkout in a statement issued after the meeting, but cited Siluanov as calling on the G20 not to politicise dialogue between members and stressing the grouping had always focused on the economy.

He also complained about the damaging effect of Western sanctions, the statement said.

“Another aspect of the current crisis is the undermining of confidence in the existing international monetary and financial system,” it said. “The safety of international reserves and the possibility of free trade and financial transactions are no longer guaranteed.”

IMF Managing Director Kristalina Georgieva on Wednesday acknowledged it was a “difficult moment” for the G20, but she insisted that cooperation through the forum would continue.

“There are clearly very, very unsettling facts we have to deal with,” she said. “But we also recognise how interdependent we are … and it is so obvious that cooperation must and will continue.”
But as the war in Ukraine continues, and as Russian forces bombard cities across the country’s east, pressure is growing to exclude Russia from international organisations.

Earlier this month, the United Nations General Assembly expelled Russia from the Human Rights Council over the invasion, as nations raised “grave concern at the ongoing human rights and humanitarian crisis in Ukraine”.

This week, Washington and its allies in Europe also promised to “tighten” their sanctions against Moscow in an effort to end the bloodshed.

On Wednesday, the Biden administration announced fresh sanctions against dozens of people and entities, including Russian commercial bank Transkapitalbank and oligarch Konstantin Malofeyev.

The US “can and will target those who evade, attempt to evade, or aid the evasion of US sanctions against Russia, as they are helping support Putin’s brutal war of choice,” Under Secretary for Terrorism and Financial Intelligence Brian E Nelson said in a statement.
(Aljazeera)