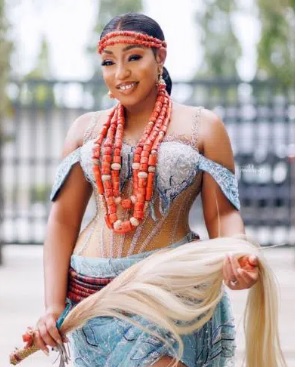 It has continued to rain congratulations for Nollywood actress, Rita Dominic as she walks down the aisle with her Heartthrob, Fidelis Anosike, Daily Times publisher and the Founder of Folio Media Group, today, April 19th in Imo.

Naija News earlier reported that the 46-year-old actress is set to walk down the aisle with her hubby, Fidelis Anosike, the Founder of Folio Media Group.

The actress who looked dazzling released via Instagram first photos from her on-going wedding.

In the beautiful photos, the actress stepped out in style in her Imo State outfit with her bridal train behind her.

This comes weeks after the couple released their pre-wedding photos on social media to the excitement of everyone.