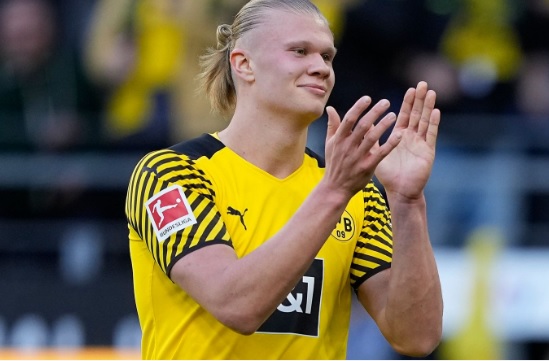 Pep Guardiola’s side have been leading the race to sign Haaland this year and his release clause means Borussia Dortmund are resigned to losing the striker this summer.
The 75m euro fee – which equates to £62m – for Haaland is widely considered to be below market value, but reports in the English media on Tuesday suggest City will have to pay the 21-year-old – who is represented by Mino Raiola – more than £500,000 per week.

Dortmund – who play Bayern Munich in Der Klassiker on Saturday, live on Sky Sports – are set to sign Red Bull Salzburg striker Karim Adeyemi as the Norwegian’s replacement.
City have often played without a recognized striker this season following the exit of club-record goal scorer Sergio Aguero at the end of the 2020/21 campaign.
Guardiola was keen to sign Harry Kane from Tottenham last summer and City had offers turned down for the Spurs striker, who expressed his desire to leave north London in search of silverware.
However, the England is now enjoying a fine run of form under Antonio Conte as Spurs bid to finish in the top four of the Premier League
Haaland joined Dortmund from Salzburg in January 2020 and has gone on to score a remarkable 82 goals in 85 games for the German side.

Haaland has missed a number of games with injury this season, but he has still scored 25 goals in 26 games to help Dortmund to second place in the Bundesliga, though they must win their game at Bayern this weekend to retain any hope of winning the title.
Manchester United were also reported to be interested in Haaland last year, and were understood to have met the release clause in his Salzburg contract before he moved to Dortmund.

During his time as United manager, Ole Gunnar Solskjaer said “I follow Erling closely”, while the club also sent representatives to watch the striker at Dortmund.

City’s most serious competition for Haaland during his time at Dortmund has been from Real Madrid, but their priority this summer is to sign Kylian Mbappe as a free agent when his Paris Saint-Germain contract runs out.

PSG are willing to do whatever it takes to convince the France international to sign a new contract but he still has his heart set on moving to Madrid, even though some people close to him have advised him to stay in Paris.

If Mbappe does leave it will make it even more likely that PSG will try to sign Robert Lewandowski from Bayern Munich.
Could Haaland and Mbappe pick up the baton and dominate world football to the extent Cristiano Ronaldo and Lionel Messi have for the past decade and beyond? Sky Sports’ Gary Neville is not so sure.

“I don’t think Haaland and Mbappe can get anywhere near the levels of Ronaldo and Messi,” the former Manchester United defender said.

“Haaland and Mbappe are two young players who are massively talented. They can become the best in the world and achieve great things, but we shouldn’t think every new, young superstar will automatically take over from Ronaldo and Messi, who are the kind of players you’d be lucky to see once every 80 years.
“Players like these aren’t produced every decade.

“In my time we had Zinedine Zidane, Luis Figo, the Brazilian Ronaldo, Rivaldo, Ronaldinho, world-class players who were absolutely sensational, but even as great as they were, they were not Messi and Ronaldo, who are on another planet.”
(Skysport)