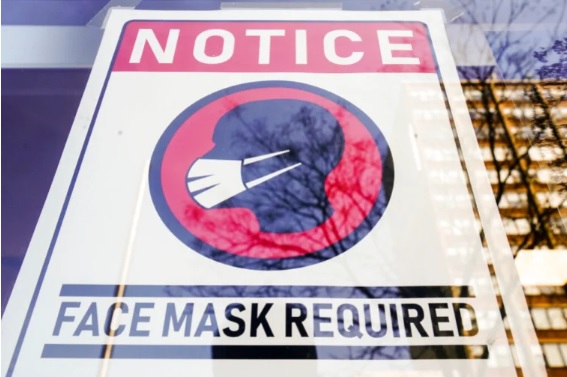 face mask no longer mandatory on planes and trains

A federal judge in the US state of Florida has ruled a United States government order requiring people to wear masks on public transportation is unlawful, overturning a Biden administration effort to reduce the spread of COVID-19.

Last week, US health officials had extended by 15 days the mandate requiring travelers to wear masks on airplanes, trains, and in taxis, ride-share vehicles or transit hubs, saying they needed time to assess the effect of a recent rise in COVID-19 cases.
But a ruling on Monday by US District Judge Kathryn Kimball Mizelle said the US Centers for Disease Control and Prevention (CDC) had exceeded its authority with the mandate, had not sought public comment, and did not adequately explain the decision.

Mizelle’s ruling came in a lawsuit filed last year in Tampa, Florida, by a group called the Health Freedom Defense Fund, which has challenged state and federal vaccine and mask mandates in courts across the country.
The CDC first issued a public health order requiring masks on interstate transportation in February 2021. The Transportation Security Administration (TSA) issued a security directive to enforce the CDC order.

In her 59-page ruling, Mizelle said the only remedy was to vacate the rule entirely across the country because it would be impossible to end it for the limited group of people who objected in the lawsuit.

The judge said “a limited remedy would be no remedy at all” and that the courts have full authority to make a decision such as this — even if the goals of the CDC in fighting the virus are laudable.

“Because our system does not permit agencies to act unlawfully even in pursuit of desirable ends, the court declares unlawful and vacates the mask mandate,” she wrote.

The judge sent the issue back to the CDC. It was not clear whether the judge’s order would take immediate effect and the TSA’s order for the mask mandate appeared to still be in effect.
“What we announced last week was just a two-week extension in order to have time to assess what we’ve all seen as rising cases and make an assessment, a recommendation with that in mind,” White House Press Secretary Jen Psaki said during a news briefing on Monday afternoon.
“So of course it’s disappointing,” said Psaki, of Judge Mizelle’s ruling.

Industry groups and Republican lawmakers had wanted the Biden administration to immediately end the 14-month-old mask mandate last week. But the CDC said it wanted more time to study the BA.2 Omicron subvariant now spreading rapidly in the US.
The City of Philadelphia on Monday re-imposed a local mandate requiring people to wear masks in all indoor public spaces such as restaurants due to rising infections.
Monday’s ruling in Florida could create confusion on planes, where the mask mandate has caused a surge in incidents and altercations between airline officials enforcing the mandate and passengers rejecting the demand they cover their faces.

The Federal Aviation Administration said that since January 2021, there have been a record 7,060 unruly passenger incidents reported – and 70 percent involved masking rules.

Airlines for America, for example, had urged the Biden administration “to lean into science and research, which clearly support lifting the mask mandate”.
“It makes no sense to require masks on a plane when masks are not recommended in places like restaurants, bars or crowded sports facilities,” the group, which represents major US passenger airlines, said. It did not have an immediate comment on Monday’s ruling.
(Aljazeera)