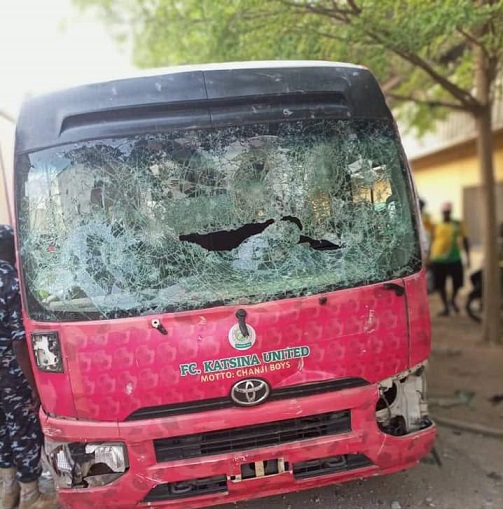 Kano Pillars football club (Sai Masu Gida) totally condemned the action of some unpatriotic fans on Saturday by causing a distraction that led to the discontinuation of matchday 23 against Katsina United football club in the ongoing 2021/2022 Npfl Season at Sani Abacha Stadium Kofar Mata, Kano.

According to the Media Officer of the club, Rilwanu Idris malikawa said the match was stopped because of the un-sportsman behavior of some irate fans who were throwing sachets of pure water and some objects at the arena and field of play leading to both team and match officials to be evacuated to their dressing rooms.

Malikawa said unfortunately some unpatriotic fans the opportunity and damaged the bus of Katsina United football club and some parts of the Kano Pillars football club bus.

He said the management of Sai Masu Gida are suspecting that undesirable fans’ attitudes are a gang up of some saboteurs who don’t want the progress of the club.

What happened on Saturday is beyond football because nothing happened before and during the time of the incident in the match; both teams and match officials were doing their primary duties on the field of play, Malikawa said.

He explained that they never expected anything negative in that match considering Sai Masu Gida’s relationship with Katsina united; more so, Pillars Fc recently played about three of their home matches at Muhammad Dikko Stadium Katsina without any rancor.

Malikawa said the club management, Kano state football association, and the executives of Pillars fans club would not fold their arms and allowed anybody found wanting in this unpatriotic behavior to go unpunished.

“We are waiting for the security report from the security personnel on duty at the Stadium for necessary action,” he added.

The Media Officer confirmed that players and officials of Katsina United football club were conveyed in one of the Sai masu gida buses to their hometown, Katsina, Saturday night, and thank God no casualties from both teams and the match officials.