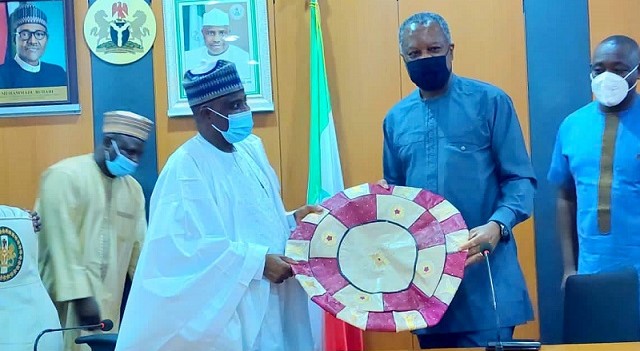 The Federal Government has been commended for its sustained efforts in rescuing and bringing back Nigerians, especially students trapped in Ukraine as a result of Russian invasion.

Tambuwal made the commendation while receiving the Minister of Foreign Affairs Geoffrey Onyema, also applauded the federal government for its non-partisan support to the state in checkmating the spate of insecurity that has ravaged parts of it and the country in the recent past.

“I commend the Federal Government for the ongoing efforts to evacuate trapped Nigerians from Ukraine,” the Governor said while singling out the minister for his uncommon determination and patriotism in ensuring the triumph of Nigeria’s diplomacy.

“He is among the few foreign ministers we have had that speak every important language in the world. He is doing well and representing our country very well in every forum internationally,” the Governor explained.

Praying to God to continue to strengthen President Muhammadu Buhari to confront all security challenges facing the country, Tambuwal appreciated the support of the Federal Government in tackling insecurity in the state, emphasizing that “there is synergy among security apparatuses working in Sokoto.”

“Peace is gradually returning to Sokoto,” he said, noting that “whatever affects one state in Nigeria affects all and even neighboring countries.”

On the role of Sokoto in sustaining national cohesion and integration, the Governor said the state “is one state where everyone is treated equally, explaining that there no discrimination in terms of provision of subsidized education, housing and empowerment to the people of Sokoto and Nigerians of all shades and convictions living in the state.

“We must work towards ensuring that all of us are one. We must not discriminate against one another. We must work as one people who have the country at heart,” Tambuwal advocated.

In his remarks, Onyema said himself and his team were in Sokoto to commiserate with the government and people of the state over the tragedies witnessed and suffered over time.

According to him, the international community is behind the Governor and the state, while expressing profound sympathy and condolences to the families and victims of unfortunate incidents that were witnessed in the state.

“Mr President is proud of you and the state. Many people have spoken sincerely and highly of his and state hospitality,” the Minister noted, saying

that he hopes other states will emulate what you and Sokoto are doing.”

On the efforts to move Nigerians trapped in Ukraine out of the embattled country, Onyema said all the students of Sokoto state caught in the tragedy have been evacuated, just as the government continues to work tirelessly to ensure the evacuation of all Nigerians there.

He explained that in that regard the over 400 students trapped in Sumy, North-Eastern Ukraine will now be evacuated after difficult negotiation