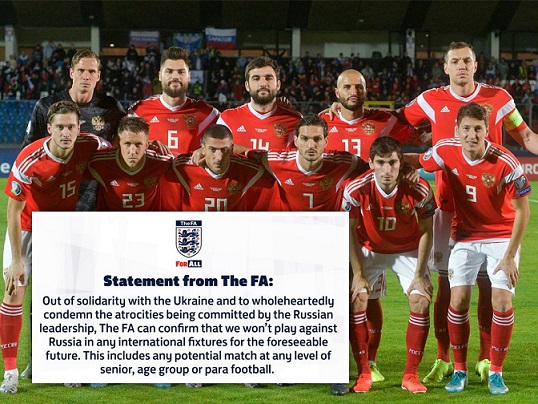 England will not play against Russia in any international football fixture “for the foreseeable future” amidst the ongoing conflict in Ukraine., the FA has announced.

The Football Association released a statement on Sunday, February 27confirming that, out of solidarity, they will not play any matches against Russia as they condemn the action of Vladimir Putin’s forces in Ukraine.

This comes shortly after FIFA was advised to take action against Russia and ban them from the upcoming 2022 World Cup in Qatar.

In a statement released on Twitter, the FA said: ‘Out of solidarity with Ukraine and to wholeheartedly condemn the atrocities being committed by the Russian leadership, The FA can confirm that we won’t play against Russia in any international fixtures for the foreseeable future.

‘This includes any potential match at any level of senior, age group or para football.’

Ukraine invasion: England FA confirm they will NOT play against Russia in any international fixtures

It comes after Poland said it would refuse to play an upcoming World Cup play-off match against Russia.

Sweden and the Czech Republic’s football associations followed by announcing yesterday their teams would also refuse to play Russia at any venue.

Since Russia embarked on its invasion of Ukraine on Thursday, the Champions League final has been moved from St Petersburg to Paris by UEFA, which is also under pressure to end sponsorship from Russian energy giant Gazprom.

And Manchester United has dropped Russian state airline Aeroflot as a sponsor.