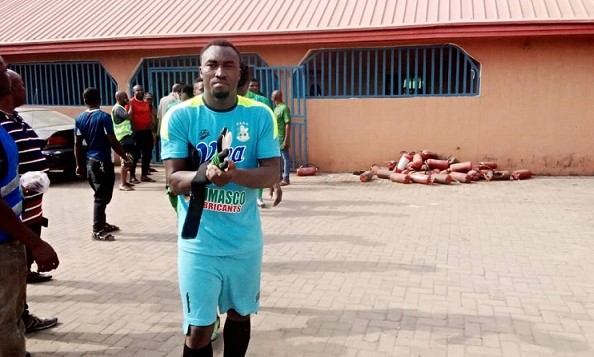 The Goalkeeper of the Sai masu gida, Idris Ibrahim (Ghanian) was voted as Man of the match by the journalists at the event considering the numerous saves, he did in the encounter which blocked the home team from getting the maximum three points.

The Chief Coach of Kano Pillars football club, Ibrahim A. Musa in his post-match conference said they were in Nnewi with a target to win the game but thanked God for the draw.

He described Rangers football club as a good side and so far, they are one of the teams on the top of the table, and taking away a point from them is very vital to his side.

Coach Musa expressed appreciation to his player’s commitment from the beginning to the end of the game and thumps up to them for picking a vital point.

He charged his players to be more focused on the task ahead of them, particularly the two home matches scheduled for next week at Ahmadu Bello Stadium Kaduna with league leaders, Rivers United, and Nasarawa United football clubs.

On his part, the goalkeeper that was voted as Man of the match for his wonderful performance, Coach Musa said he deserved commendations though it’s a collective effort from his teammates that gave them the result.

Gabriel Jeremiah who spoke on behalf of the sai masu gida said the game was very tough and tactical.

He thanked God for making it possible for them to achieve their target not leaving Nnewi disappointed.

He urged supporters of Kano Pillars to remain patient, that by God’s grace, gradually the club would go back to its normal position in the league.

With this result, sai masu gida is in the fourteenth position with eighteen points in fifteen matches.

KSADP Revives Artificial Insemination in Kano with Over N110m Investment