Zulum, Shettima share food, cash to over 60,800 returnees in Gamboru 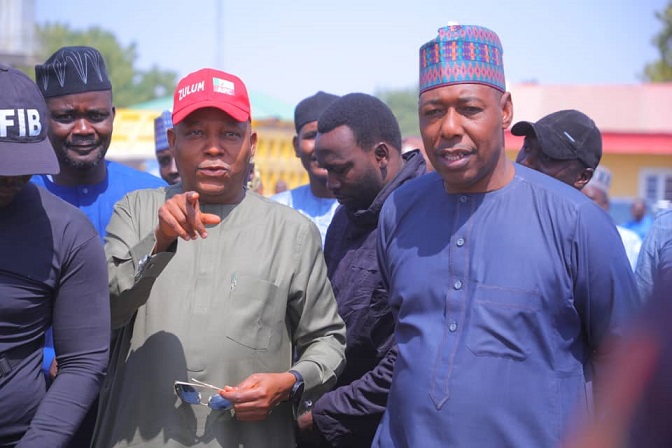 The leaders supervised and also got directly involved in the distribution of food and non-food items to a combined number of 60,813 internally displaced persons in camps and those resettled in communities.

Zulum and Shettima (who represents Borno Central where Ngala is located) traveled by road from Maiduguri on Sunday and on their first day in Gamboru, a total of 55,253 persons from Gamboru and Ngala towns received food and non-food items.

On the second day, another 5,560 IDPs recently resettled in Wulgo town also in Ngala LGA were supported.

Zulum and Shettima were received on arrival by some key stakeholders of Ngala LGA comprising the member of the State Assembly representing Ngala, Bukar Mustapha Dalhatu, Commissioner of Religious Affairs, Abacha Umar Ngala, Special Adviser on RRR, AbdulRahman AbdulKarim, and Special Adviser on Events and Hospitality, Bintu Sheriff. All the stakeholders contributed to hosting the Governor’s delegation, and in the mobilization, coordination, and distribution of humanitarian responses.

Aside from coordinating humanitarian responses, Governor Zulum visited the General Hospital in Ngala town and a primary healthcare centre in Gamboru town.

During the visit, the Governor interacted with medical doctors and even announced that he will approve salaries that will match whatever International NGOs are using to attract doctors to operate in Ngala.

Zulum’s promise is based on an instance in 2021 in which he had to suspend Government employed doctors for being absent at the general hospital, leaving services to only doctors working for International NGOs involved with humanitarian activities. Zulum had fumed that while NGO doctors from other countries were there to serve, those being paid by the State Government abandoned their duties.

The Governor, in his yesterday’s visit, interact with doctors, nurses, and other health workers, and listened to issues they raised with a promise to address them head-on.

Cost of Governance: Our Leaders Should Lead by Example