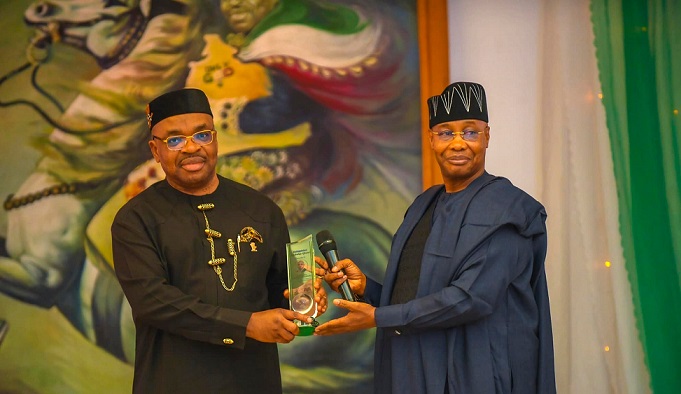 Governor Udom Emmanuel has bagged a Distinguish Leadership Award from the Nigeria Police Force, in recognition of his sterling leadership qualities and partnership with security agents to promote and sustain peace in Akwa Ibom State.

The award which took place on Wednesday, during a State Banquet, at Banquet Hall, Government House, Uyo, was presented by the Inspector-General, Usman Baba.

Governor Emmanuel had expressed appreciation to the Nigeria Police Force for the choice of Akwa Ibom to host a 2-day Conference and Retreat for Senior Police Officers, and recognition of the people-oriented projects in the State.

The Governor also made an appeal for the hosting of Nigeria Police Games in 2022, assuring that with the ultra-modern stadium and sports facilities in the State, the games will be a success.

“On behalf of the government and the good people of this state, let me express our sincere appreciation to the entire Police hierarchy in this country led by the Inspector General of Police. We see this as a great privilege.

“I whispered to the IGP that if this is just a retreat of CPs and above, I can imagine when you bring the Police games later this year, it means it’s going to be marvelous and I promise him if he brings the Police games here, I will give him the three standard stadia we have here in the state.”

The Chief Executive, further described the IGP as a man of capacity and accessibility, adding that his leadership in the Force radiates light to Nigeria.

“The entire Akwa is indebted to you, for your show of love, support, benevolence, and above all for who you are in Nigeria today”.

The Inspector-General of Police Usman Baba thanked Governor Udom Emmanuel for hosting the second edition of the Conference and Retreat for Senior Police Officers.

The IGP also commended Governor Emmanuel for his dedication, hard work, and experience to steer the ship of leadership in the State with tangible results.

The Inspector-General of Police pledged to provide security for Nigerians to go about their businesses and called on other governors to emulate Governor Emmanuel in his module to achieve peace in the state.

“I want other Governors to emulate Governor Udom Emmanuel so that Nigeria can enjoy peace and tranquility.

“We on our path are ready, willing, and able to provide the required security to Nigerians so long as we have tools to work”, he noted.

The IGP assured the state of hosting the Nigeria Police Games 2022, taking advantage of the support the governor granted earlier.

“I have handed the Chairman of Police Games to Governor Emmanuel, who has handed him to his Commissioner for Sports, we will collaborate and leverage on your kind assistance and benevolence to see when we can host the Police Games in Akwa Ibom State”, he assured.