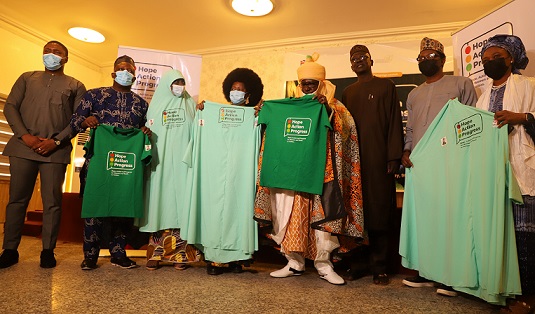 ActionAid Nigeria (AAN) and its consortium member, the Centre for Communication and Social Impact (CCSI) has launched a media campaign for youths and women’s political inclusion under the We-YOU Project in Kano.

The theme of the campaign “Hope, Action, and Progress for Women and Youths in Politics,” is depicted by a traffic light with red, amber, and green urging stakeholders to stop, get ready, and act.

One of the many key messages is to change the narrative; youths must make deliberate efforts to be involved in political processes to be leaders of today, not imaginary leaders of tomorrow.

The campaign will be implemented in Kaduna and Kano under the WE-YOU Project.

The project seeks to strengthen the relationships between citizens, government, and politicians in Nigeria. The goal is to engender inclusive and responsive democratic processes and outcomes.

According to the design of the project, this will be achieved through mobilizing a critical mass of young people and women leading engaging campaigns toward translating citizens’ demands into policy actions.

In her opening remarks at the event, Wednesday, AAN, Country Director, Ene Obi called on the target groups to get actively involved in governance, to let their voices be heard, and use their experiences and expertise for optimal growth and development of the country.

She encouraged citizens to take advantage of the continuous voter registration by Independent National Electoral Commission and get registered to let their votes count in the forthcoming general election.

“You need to stand upright for Nigeria by engaging in the political process from your very own community for you to uphold the Constitution of the Federal Republic of Nigeria.

“I believe in a society where everyone’s dignity is respected, where there is utmost freedom to choose, the type of freedom that stems from respect for fundamental human rights of persons irrespective of their age, gender, social, political, and economic status.

“As a social justice crusader, I am glad that this project addresses the gap of dignity and representation in the political sphere, as it is my utmost belief that the voices of Women and Youths must be heard in the political leadership in Nigeria,” she added.

On her part, the Executive Director, CCSI, Babafunke Fagbemi said: “The project is about everybody collectively and individually.  It is a very important project, that is seeking to give political voice to very special demography that has been neglected in Nigeria.

“Women who are the largest demography of the country’s population, are left out without political voice,” adding that in Nigeria, women participation in politics is not proportionate to the over 45% of the nation’s population which they represent and this has not translated into equal representation in political leadership positions.

She noted that Nigerian youths are faced with several barriers hindering their participation in politics and governance.

Fagbemi explained that the recent “Not too Young to Run” bill provided a chance for the youth to contest for electoral positions and be recognized in the electoral sphere in Nigeria.

But, according to her, there is still a vast gap in the participation of youths in the Nigerian political space.

“Several factors have been identified to be responsible for the poor participation of youths in politics and they include financial constraint, lack of skills, and the lack of understanding of the benefits of youth engagement in the policy and program of action by the Nigerian government.

“This campaign is targeted at mobilizing a critical mass of young people and women who will lead disruptive campaigns towards translating citizens’ demands into policy actions to contribute to an inclusive and responsive democratic process and outcomes through citizens-led actions towards 2023 general elections in Nigeria.”

“We will equip the media with the critical skills needed to report factually and effectively.

“We will also carry the media along in all the grassroots programs in all the focal states on this project,” she stated.

His Royal Highness, Emir of Kano, Alh. Aminu Ado Bayero, while declaring the campaign opened said the launch came at the right time.

He cautioned youths against political thuggery and misconduct.

The Emir who was represented by Fagacin Kano, Alh. Habibu Dankadai, said the overall benefits of inclusion and participation of youths and women in politics cannot be overemphasized.

Bayero said: “Both youths and women are key in politics because they constitute a large number of the electorate and play an important role.”

He also urged the target groups to get involved in all political processes, contest and elect credible people to hold leadership positions in the country.

He then thanked the consortium for launching the project in Kano.

He said: “On behalf of all working journalists in Kano, I wish to inform you of our total commitment to support the course of promoting youths and women inclusion.

“We also vow to expose any sabotage or discrimination to women and youths’ inclusion in 2023 elections.”

The project is funded by the government of the United Kingdom through the Foreign Commonwealth and Development Office (FCDO).

Bagudu Mandates Newly Sworn-in LG Chairmen to Carry Everybody Along