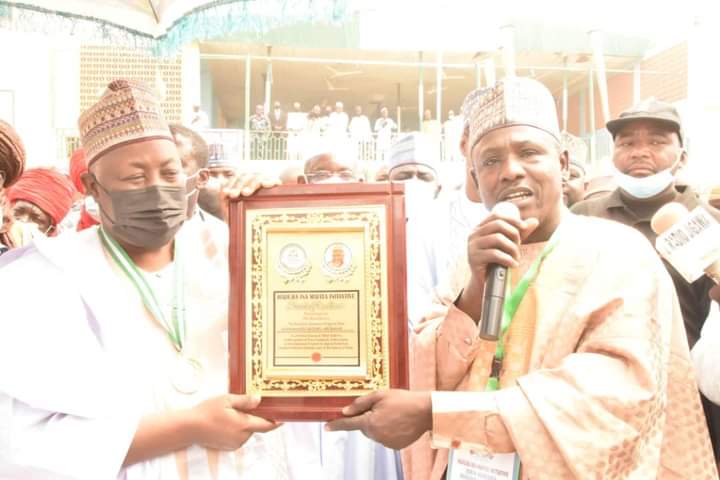 Governor Muhammad Badaru Abubakar of Jigawa state has declared that he had succeeded in fulfilling 94 percent of the promises he made to Jigawa state people during the campaign, but he has no power to impose or anoint his successor.

The Governor made the declaration while speaking in the ancient city of Hadejia shortly after he received an award of Excellence presented to him by the Hadejia Emirate Group known as “Hadejia Ina Mafita.”

He said, Jigawa state belongs to Jigawa peoples and they own the sacrosanctity right to choose their next governor.

Governor Badaru added that he was elected by Jigawa people for a two-term governorship and as he is about to finish his tenure, he hopes for the next governor of the state to be a person of integrity, honesty, and full of patriotism who will also continue with all good works he is doing for the state.

He, however, declared that besides the projects he promised he had also executed hundreds of projects and programs that positively impacted the lives of Jigawa state citizens.

“I have done a minimum of one project in each community across rural, urban and cities in the state”

He then promised to complete the remaining 6 percent of the campaign promises as well as execute many more projects that will improve the social and economic life of Jigawa state peoples.

Speaking at the occasion Emir of Hadejia, Alhaji Adamu Abubakar Maje, said in his speech that the people of Hadejia Emirate are glad of the development that has come as a result of governor Badaru’s enormous accomplishments.

In his speech, the Chairman Hadejia Ina Mafita. Alhaji Baidi Muhammad Gajo Elleman said, they presented the award to the governor in recognition of his hardworking, promise-to keep, and love to Hadejia Emirate, Jigawa state. Nigeria and Humanity at general.

Alhaji Baidi also confirmed that out of the 35 projects they presented to the governor during the 2014 campaign he had fulfilled 32 at the moment.