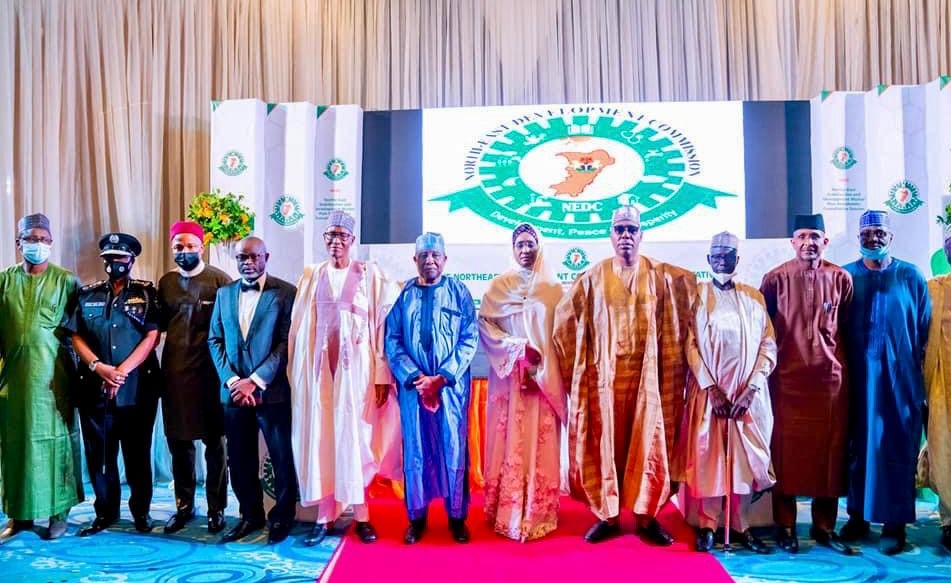 Borno State Governor, Professor Babagana Umara Zulum on Tuesday charged stakeholders including himself to work together in developing an ambitious but realistic and achievable master plan for the stabilization and development of Adamawa, Bauchi, Borno, Gombe, Taraba and Yobe States which make up the six States in the northeast geopolitical zone.

Zulum who chairs the forum of northeast Governors spoke as special guest of honour of a multi-stakeholder consultation forum with the theme: North East Stabilization and Development Master Plan (NESDMP) project, which was hosted by the Northeast Development Commission, NEDC at the Congress Hall of Transcorp Hilton in Abuja.

Addressing the participants, Governor Zulum said: “Let me start by thanking President Muhammadu Buhari and the Minister of Humanitarian Affairs for their interventions in ensuring that there is peace in the North East.

“We all understand the crucial role that consistency can play in bringing back peace, stability and prosperity in the North East in particular and Nigeria in general. This master plan must be ambitious, broad, brave, comprehensive to cover the whole scope of issues in the Northeast”

“The plan should outlive our tenures in office. It should be a reflection of our doggedness to rise from the ashes of destruction into the bright and welcoming place of peace and development. Our aspirations, as Governors and people of the region, therefore, should be to build back better everything that we lost and much more.

“The work may appear to be daunting, but rest assured that the bulk will be made easier than we can imagine through the unflinching support you will receive from the leadership in the northeast as a whole. Our respective States in the North East will make available plans for the purpose of alignment and synergy that will deliver better quality service to the people of the northeast” Zulum added.

“Using Borno State as an example, we will make available our 25-year development plan as a starting point on our own side. My colleagues will provide their’s as well. It is important that we are not starting from ground zero. Building on efforts already on ground, we should ensure that we are not just making plans that don’t talk with one another. We should make plans for common purpose governed by good leadership and commitment to finish whatever we start” the Governor said.

“This plan should not be a political plan. It should be a people’s plan. A strategic direction to bring back peace in the North East. I implore everyone involved to help us bring back the lost glory of the north east” Zulum urged.

In her remarks as Chief Host, Minister of Humanitarian Affairs, Disaster Management and Social Development, Sadiya Umar Farouq explained that “the necessity for a North East master plan is stated in  SECTION 8 (1C) of the NEDC Act, which lists as one of the functions of the NEDC to ‘Develop a Master Plan based on the needs assessment of the zone to be known as the North East Stabilization and Development Master Plan (NESDMP), which shall contain programmes and schemes that promote and facilitate the physical and  socio economic  development of the North East Zone, and the estimate of the time and costs for implementing such programmes and schemes”.

On his part, the Chief of Defence Staff, General Lucky Irabor, who was represented by Commander, Defence Headquarters’ Garrison, Major-General Preye Fakrogha, pledged the military’s support towards realizing the plan and its implementation.

Managing Director/CEO of the North East Development Commission (NEDC) Mohammed G. Alkali recalled that “before yesterday’s larger forum, the NEDC had consulted relevant stakeholders in a bottom-up approach”, noting that so far, engagements on the Master Plan were held at grassroots level in all the 112 LGAs” across the six States in the northeast.

“The event we are witnessing today is one of the high points of such consultations because all the Federal MDAs and security agencies execute priceless and impactful interventions in the North-East Region” the MD said.