Menu
Home Politics LG Election: ‘I have forgiven those who have been throwing tantrums at me’ – Gov. Bagudu
Politics 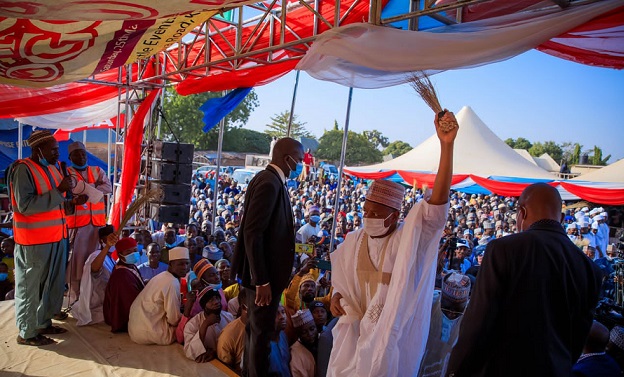 Kebbi State Governor Abubakar Atiku Bagudu has said that he has forgiven all those who ganged up against him in the state.

Governor Bagudu stated this during the official flag-off of the All-Progressive Congress (APC) campaign for the party’s Chairmanship and Councillorship candidates in the forthcoming local government election scheduled for February 5, 2022.

Addressing the party members, Governor Bagudu recalled how Malami step down for him during the party’s primary which enable him to clinch the gubernatorial ticket of the party without any rancor.

Bagudu described ascension to leadership as an act of God, advising all the candidates to be magnanimous, and mandated them to strive to pacify aggrieved members of the APC to return to the fold.

Governor Bagudu however told the tumultuous crowd at the occasion, that he has forgiven those who have been throwing tantrums at him for whatever reason”.

“Our government is a government that is engaging our youths for the development of the state. Our state is blessed with many rice processing companies which is the outcome of President Muhammad Buhari administration’s commitment to the agriculture revolution,” the governor said.

“Once again I have forgiven those who gang up against me,” he added.

The governor urged members of the party to continue to live peacefully with others in the state and charged them to work hard for the success of the APC in the local government election.

Earlier, the Minister of Justice, Abubakar Chika Malami, SAN, who cited a Qur’an verse during his remarks, noted that, no matter how long falsehood flies, the truth will overcome it one day.

He described Bagudu as a man with good character, stressed that his leadership quality made his colleagues at the Progressive Governors’ Forum elected him as their chairman.

Malami urged all members of the party to team up for the total victory of their candidates in the forthcoming local government election.

In his remark, the former governor of the state, Alhaji Dakingari, described the successful hosting of the flag-off of the party local government election campaign in Kamba as a testimony that Kebbi is an APC state.

Dakingari, who appealed to party members to continue to embrace dialogue, peace, said the doors of the APC are still open for dialogue from aggrieved members of the party.

The state chairman of the party, Alhaji Muhammad Kana urged members of the party to come out en mass to vote for all APC candidates in the forthcoming local government election.

Other speakers at the occasion are the deputy governor, the speaker of Kebbi state house of assembly, chief of staff, commissioners, special advice, and the senator Bala NaAll ah among other dignitaries.

FAAC: FG, states, LGs share N699bn as allocation in December up by N23bn