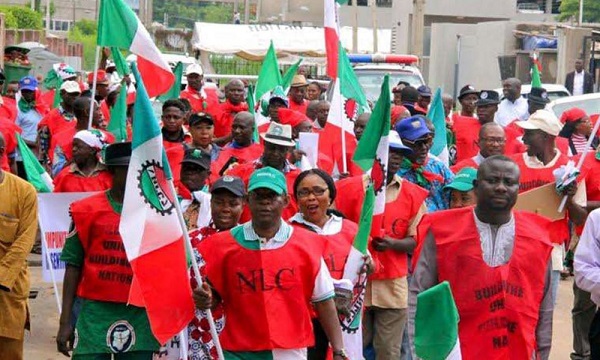 The Nigeria Labour Congress (NLC), Zamfara State Chapter says it will observe the proposed national rally/protest on fuel subsidy removal as directed by the leadership of NLC.

This was contained in a communique jointly signed by the Chairperson, Comrade Sani Halliru, and Acting Secretary, Comrade Ahmad Abubakar after its State Executive Council (SEC) meeting held at NLC Secretariat on Thursday.

The communique read: “That, the proposed national rally as directed by the NLC national leadership on subsidy removal would be promptly observed on January 27, 2022, by the State Congress to demonstrate their concern to the plight of Nigerians on the current economic hardship instituted by an excessive increase in fuel price by the federal government.”

Other resolutions contained in the communique are;

1. That the SEC-in- Session expressed satisfaction with the level of commitment being exhibited by the present administration of Governor Bello Muhammad Matawalle in addressing major security challenges bedeviling the State and condoled the State Government over the recent attacks on some communities in Bukuyyum and Anka local Local Government areas that resulted to the loss of innocent citizens and properties

2. That the meeting also called on the State government to redouble efforts in that direction and urged people in the State to maintain their support to the State Government policies and programs.

3. That, the Sec-in-Session resolved to collectively comply with national directives on strike for no implementation of the new national minimum wage if not properly engaged for discussion by the State Government.

4. That, the one hundred million naira offered by the State Government for the implementation of thirty-thousand-naira minimum wage across the board in all the payment point is too meager as the projected table of the said amount is nothing to ride home about.

5. The Sec-in-Session charged the State Government to ensure appropriate data on death and retirement been recorded in the civil service as the two create a surplus financial vacuum to support the government in actualizing its constitutional duty of implementing the new minimum wage.

The meeting further condemned the monthly presentation of stagnant salary figures by the MDAs responsible for the preparations of salaries and called on the State Government to punish any civil servant or public servant involved in that act.

6. That, the SEC-in-Session are not satisfied with the minimum level consideration and treatment being accorded to the labour issues by the State Government and its officials in the State as all efforts to interface with the Governor to brief him on the current realities proved abortive, having clearly observed that all doors to reach out to him have been shut down to the Congress by some key designated government officials.

7. That, the leadership was charged to follow up all pending promotions/ annual increments of civil servants at both State and Local Governments as the constant outcry of civil servants in the State is solely becoming uncontrollable by the leadership of Congress, and the government is not ready to listen to our complaints owing to the fact that officials of the Congress are doing the needful to address the civil servants on those issues.

8. The meeting further called on the State Government to intervene on the current ongoing Daza One Hundred and Sixty-Eight (168) Housing Units eviction process by the Federal Mortgage Bank, having identified the wrongful allocation of the houses by the previous administration.

9. That the SEC-in-Session, therefore, would not allow its members and their families to be rendered homeless as a result of the inability of other officials in the past.

The meeting ended with special prayers for the restoration of peace and security in the State and prayed for the government’s quick response to the identified pressing issues bedeviling the workers.

The Sec-in-Session appreciates the National President of the Congress Comrade Ayuba Phillips Waba Mni for his official condolence message to the State Government on the recent bandits’ attacks, the executive wishes the Governor success in his administration.