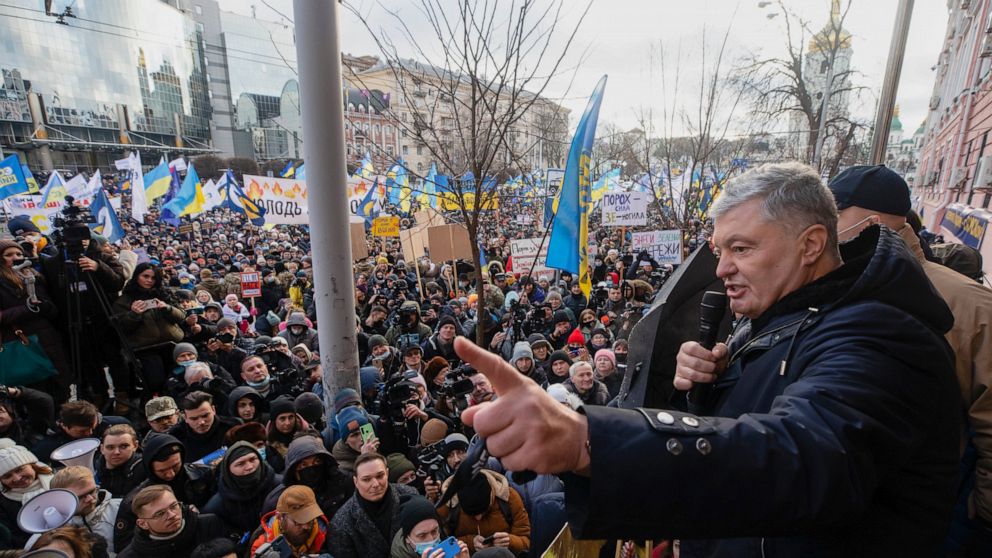 KYIV, Ukraine — A court in Ukraine on Wednesday rejected a motion by prosecutors to put former President Petro Poroshenko in custody pending an investigation and trial on the charges of treason, allowing the politician to walk out with just a few restrictions on his behavior.

The ruling barred Poroshenko from leaving the capital, Kyiv, or the outlying region without permission from law enforcement officials, and obligated him to surrender his passport and make himself available for questioning when required.

Poroshenko returned to Ukraine with much fanfare on Monday to face the charges, which he insists are politically motivated. He told a crowd of supporters on Wednesday: “We are not afraid; the truth is with us.”

The prosecution has accused Poroshenko, owner of the Roshen confectionery empire and one of Ukraine’s richest businessmen, of being involved in the sale of large amounts of coal that helped finance Russian-backed separatists in eastern Ukraine in 2014-15.

The former president of Ukraine has been charged with high treason and his assets have been frozen pending the investigation. He faces up to 15 years in prison if convicted.

Poroshenko maintains his innocence and accuses his successor, President Volodymyr Zelenskyy, of seeking to discredit him politically to distract the public from Ukraine’s widespread problems, including economic woes and rising deaths from COVID-19.

Zelenskyy, meanwhile, says he is waging a battle against oligarchs to reduce their influence in Ukraine’s political and economic life.

The charges are the latest in a string of accusations leveled against Poroshenko since he was defeated by Zelenskyy in 2019. They come as Russia has built up troops along the Ukraine border and the United States has voiced concerns that Russian President Vladimir Putin might be planning an invasion of Ukraine.

Poroshenko was defeated by voters following a corruption scandal and a mixed record on reforms, but he emerged with strong patriotic credentials for rebuilding the Ukrainian army as it fought Russian-backed insurgent fighters in the east.

Hundreds of his supporters rallied in front of the courthouse Wednesday, with some carrying banners that read “Stop political repression!” and “Putin is the enemy of Ukraine, not Poroshenko!”

“We don’t need another war inside Ukraine, which could have happened, had Poroshenko been arrested,” supporter Gleb Okhlebchik told The Associated Press. “Russia’s aggression is enough, Ukrainians are scared by Putin’s plans, not Poroshenko’s.”

In his speech to the crowd after the court ruling, Poroshenko also noted the tensions with Russia and urged “democratic opposition forces to immediately unite in order to push back against Russia’s aggression.”

“Zelenskyy is an opponent for me, Putin is an enemy for me,” Poroshenko said.