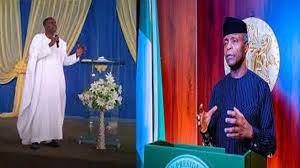 The National leader of the All-Progressives Congress, APC, and former Governor of Lagos State, Bola Ahmed Tinubu, has been told to shelve the idea of contesting the 2023 presidential election.

Prophet Bisi Olujobi of Wisdom Church International, Ketu, Lagos Nigeria, gave the warning in a statement he signed and made available to DAILY POST on Monday.

In what he described as a fresh divine insight of what is to be expected in the year 2022/2023, allegedly revealed to him by God, the cleric said he believed that with much prayer the negative part of his prophecies can be averted.

The popular octogenarian prophet urged Nigerians and the world at large to be closer to God unlike before, believing this will endear the people more to their creator who has the power to do and undo.

Prophet Olujobi revealed that Nigeria will not break as being speculated by a lot of spiritualists and agitators, adding that it is in the mind of God to keep the country together.

The clergyman calls for more prayer for Chief Sunday Igboho and the leader of the Indigenous People of Biafra, IPOB, Mazi Nnamdi Kanu as “they will be released any moment from now” according to what God has shown him, “though it will not be easy, that’s why prayer is needed on their behalf.”

On the issue of who to succeed President Buhari, the prophet declared that “Senator Ahmed Tinubu has no chances of becoming the number one citizen of the country but rather, a green light is being seen in the direction of the present Vice President, Yemi Osinbajo and if intense prayer is being rendered, he will eventually become the next President of Nigeria.”

Again, the prophet declared that “the nation’s economy and security will not go better than this, as the incumbent president has no will and stamina to do better, rather Nigerians should hope on God, whom their help cometh from.”