North Korea launches another suspected missile amid stalled talks with the U.S. 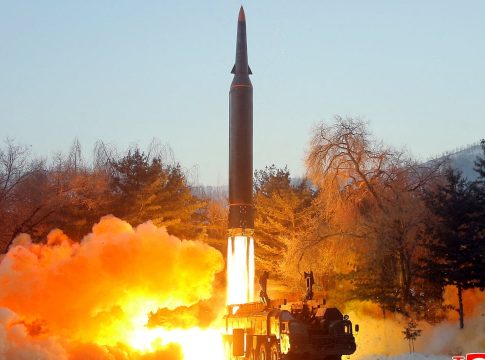 SEOUL, South Korea — North Korea on Tuesday fired what appeared to be a ballistic missile into its eastern sea, its second launch in a week, following leader Kim Jong Un’s calls to expand its nuclear weapons program in defiance of international opposition.

The launches follow a series of weapons tests in 2021 that underscored how North Korea is continuing to expand its military capabilities during a self-imposed pandemic lockdown and deadlocked nuclear talks with the United States.

South Korea’s Joint Chiefs of Staff said North Korea fired what likely was a ballistic missile from the area of its northern Jagang province. It said the weapon flew 700 kilometers (434 miles) at a maximum speed of around Mach 10 before landing in waters off its eastern coast.

It said the launch was a “clear violation” of U.N. Security Council resolutions and demonstrated a more advanced capability than North Korea’s previous launch last week. The North’s state media described that launch as a successful test of a hypersonic missile, a type of weaponry it claimed to have first tested in September.

South Korean officials didn’t provide a specific assessment of the missile type, but some experts said North Korea may have tested its purported hypersonic missile again in response to the South Korean military playing down its previous test.

Prime Minister Fumio Kishida said officials were checking the safety of ships and aircraft around Japan, but there were no immediate reports of disruptions or damage.

“It is extremely regrettable that North Korea has continued to fire” missiles so soon after the U.N. Security Council discussed its response to the North’s earlier launch, Kishida said.

The Security Council held closed-door consultations on Monday on last week’s launch, but took no action. Ahead of the talks, the U.S. and five allies issued a statement urging North Korea to abandon its nuclear and ballistic missile programs.

The U.S. Indo-Pacific Command said the launch did not pose an “immediate threat to U.S. personnel or territory, or to our allies” but underlined the destabilizing impact of North Korea’s weapons programs.