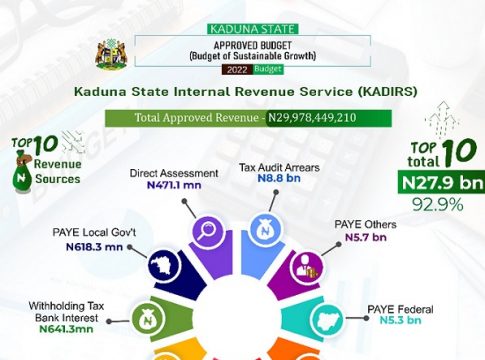 “It also means strengthening the institutions and processes that would prevent unproductive borrowing in the future; that is stronger debt and macroeconomic management, but also transparency and accountability to the public so that borrowing is done with public consciousness of its implication…” ~ Callisto Madavo (The Debt Trap in Nigeria)

In 2020, Fitch Ratings revised the Outlook on Kaduna State’s Long-Term Foreign- and Local-Currency Issuer Default Ratings (IDRs) to Negative from Stable and affirmed the IDRs at ‘B’. It stated that “the ability to enlarge the pay-as-you-earn tax base is limited by the low level of income of the population, with over 50% living below the poverty line.”

Furthermore, it posited that “Kaduna’s fast-growing 8.2 million young residents, the growing unemployment rate of around 30%, and a traditionally strong primary sector contribute to weak socio-economic standards.

The public sector is a key employer in the state, directly and through its planned investment programs. A large informal economy hinders private sector development, which ultimately affects the IGR tax base.”

This outlook should be subject to more rigorous public debate. No doubt supporters of the state government have not hesitated to display the Urban Renewal Projects, particularly the road component with the Kawo overhead bridge and underpass that replaced Leventis roundabout, as the output of the loan utilization. This they have argued has opened up the State, thereby expanding urban infrastructure, modernizing the State befitting its status, and attracting investors.

While on the other hand, public analysts and critics have raised concerns on the true economic value (cost-benefit), level of equitable distribution with rural communities largely not benefiting, quality of some of the roads will low transparency in the procurement process, aggregate kilometers of the roads compared to amount spent, small businesses lost with a lot of people thrown into poverty as a result and the ability to repay the loans in the long term.

This conversation needs to be further deepened to x-ray the available public data. Kaduna state debt profile has risen over the past six years astronomically (source Medium Term Expenditure Frameworks for the period).

If by the end of 2021 we get the expected loan of N46.9 billion hundred percent, our total debt will hit N331.3 billion. This might even go higher if the N20.2 billion external and internal loans approved for the 2022 budget are collected hundred percent. It is evident that the World Bank’s $350 million loans granted to Kaduna, to support its Development Policy Operations (DPO), are what led to the spike in our debt profile, especially in 2019.

Consequently, despite doing well with our liquidity ratio, available data for 2020 showed that our total domestic debt versus total recurrent revenue stood at 64.28%, above the 50% debt sustainability threshold.

Similarly, our total domestic debt versus Internally Generated Revenue (IGR) is 156.26%, above the set 150% threshold.

However, one must commend the government for rapidly improving our aggregate IGR. However, we need to closely look at it to understand whether we can sustainably service or repay our debt from internal revenue. This is so as the World Bank loan has a moratorium of 10years to be paid over 50 years, with an attractive low financing rate of 0.5 percent interest.

As good as this sounds, we must pay attention to our fiscal sustainability so we do not fall into a debt trap – as subsequent governments will continue to borrow to finance our budget deficit.

A look at the 2022 approved budget shows that the contribution of the real sector remains low compared to the expected N29.9 billion total revenue under the Kaduna Internal Revenue Service (IGR). A breakdown shows that Direct Assessment Tax (DAT) will contribute N471.1 million, while the highest expected revenue generator is Tax Audit Arrears with N8.8 billion with PAYE State set to contribute N2.5billion. More worrisome is the performance, as at the 3rd quarter of 2021, Direct Assessment Tax (DAT) budget performance stood at a dismal 16.4%.

Similarly, our debt service of N6.2 billion as captured in the 2022 approved budget is above the tax expected from Direct Assessment, PAYE State, PAYE Federal, and PAYE Others. Only Tax Audit Arrears is high, but it is not sustainable as we cannot depend on it because it is not a progressive revenue.

The economic growth of the State should largely be reflected in the real sector contribution to our IGR, considering the ongoing tax reforms.

This conversation is really deep and wide, hence the need for stakeholders to take a step back to x-ray where we are, where we are heading, and what concrete actions to take going forward.

As the government has committed to completing all ongoing projects in its last full year, it should also be prioritizing how to stimulate the real sector, as some of its policies/projects have affected the real sector negatively.

This will be a major step to position us to generate enough revenue to service or repay most of the debt it collects during its tenure.

Let us engage, ask the right questions and hold the government accountable.