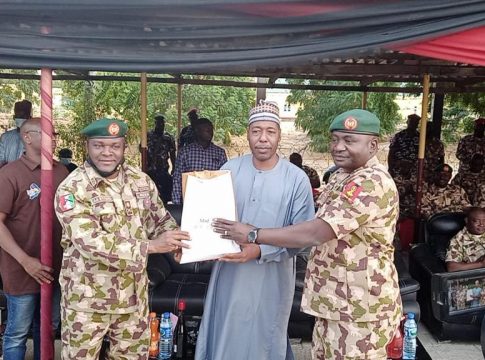 Without submitting requests to him, Borno Governor, Professor Babagana Umara Zulum on many occasions, offers logistics and other support to the Nigerian Army, to enhance the fight against Boko Haram, the acting General Officer Commanding 7 Division of the Nigerian Army, Major General A.A. Eyitayo revealed on Sunday.

The General spoke at Zulum’s visit to headquarters of the 7th Division in Maiduguri for a social gathering organized by the army to celebrate the acting GOC’s recent promotion to the rank of a Major General. Zulum was there as part of his usual support to the military operating in Borno State.

While acting as GOC, Eyitayo is commander of sector 1 of operation “Hadin kai” a larger body that is fighting Boko Haram across the Northeast.

“Severally without being prompted, you (Governor Zulum) come to our aide to support us (the army) even logistics-wise. Through your persistence and unrelenting cooperation and assistance, you (Governor Zulum) have one way or the other, turned the spirit of the soldiers into fighting machines” General Eyitayo said.

The GOC requested Governor Zulum to convey the gratitude of his officers to President Muhammadu Buhari and the Chief of Army Staff for identifying and promoting deserving soldiers involved with the fight against Boko Haram in Borno State, which he indicated, was highly encouraging.

Governor Zulum congratulated the acting GOC and other recently promoted military officers, saying the people of Borno share the good moment and are happy with it

Zulum said officers and personnel of the military and other security establishments deserve to be supported and encouraged.

He described their duties as tough ones, hence the need for not only support by states, for an increase in their entitlements, when the economy permits such considerations by the Federal Government.

The Governor credited his administration’s numerous efforts to the peace-building role of the military, which he said, has led to the safe resettlement of about 18 communities across Borno.

Zulum said with continued peace-building, more communities will be safely resettled, while some major roads, such as Maiduguri-Damboa road would be opened for the safe use of motorists.

Zulum was accompanied to the function by commissioners of Agriculture, Engr Bukar Talba, and sports and youth’s empowerment. Sainna Buba and that of transport Abubakar Tijjani