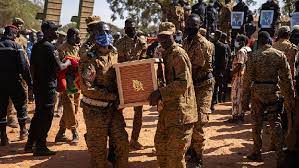 Thirteen civilians have been killed in separate attacks in northern Burkina Faso, a region that has been battling a jihadist insurgency for six years, local sources said on Friday.

11 people were killed and one wounded in an attack on Wednesday on the village of Ankouna, the governor of the Centre-North region, Casimir Segueda, said in a statement.