A Rare Venue for Exhibition Fight 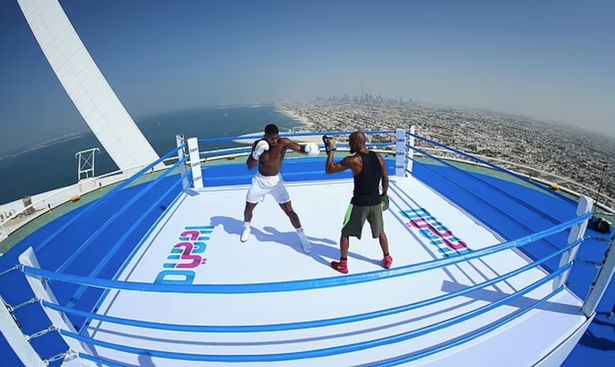 Floyd Mayweather’s next exhibition bout will take place on a helipad on top of the luxury five-star hotel Burj Al Arab in Dubai.

The undefeated boxing legend and showman, Floyd Mayweather’s next fight will be with potential next opponent YouTube star ‘Money Kicks’.

The former 50-0 undefeated fighter recently fought in an exhibition contest with YouTube star Logan Paul which is expected to have generated the retired star over £46million. A cool robbery.

Mayweather previously established that he will return to the ring once again in a mega-money bout, with YouTuber ‘Money Kicks’ in talks to be the American’s opponent.

Despite his rival not yet having been confirmed Mayweather has announced that the venue will take place on a helipad on top of the lavish Burj Al Arab hotel in Dubai on February 20.

The venue has previously been used for exclusive sporting events including heavyweight star Anthony Joshua taking part in an open workout on top of the palatial accommodation.

He also has prior boxing experience having fought on social media promotion ‘Social Knockout’ in the past.

Mayweather has admitted he “likes” what he is seeing from his potential rival and has confirmed talks are well underway.

YouTube star Rashed Belhasa, otherwise known as ‘Money Kicks’ has boxed twice in the past six months, and now could be set for a massive exhibition bout in Dubai with Mayweather. He has been called one of Dubai’s “richest kids”.

The 19-year-old social media star is the son of construction mogul Saif Belhasa, one of the most successful businessmen in the United Arab Emirates.

He recently made the switch to boxing, having befriended the likes of Anthony Joshua, Logan Paul, and Mayweather himself during his years as a social media star.

The pair first met back in 2017, when the boxing star visited Belhasa’s family’s private zoo in Dubai. They filmed a YouTube video together, where they were both celebrating big milestones in their respective careers.

The sad news is of how undisciplined Heavyweight boxer Iago Kiladze punched the referee after he was stopped in defeat during his encounter with Viktor Faust.

The Ukrainian heavyweight was facing Faust on the undercard of Luis Ortiz’s heavyweight victory over Charles Martin which headlined the bill in Florida.

Kiladze was part of an epic war with Faust with the pair having shared five knockdowns in the early stages of the contest including downing each other in the second period.

The referee Burgos stepped in to end the brutal bout with Kiladze looking as if he was off-balance due to damage sustained throughout.

With the crowd inside Seminole Hard Rock Hotel & Casino booing, Kiladze reacted furiously and threw a punch which caught the referee during his animated protests.

2023: Why I Won’t Disclose My Preferred Successor’s Identity – Buhari