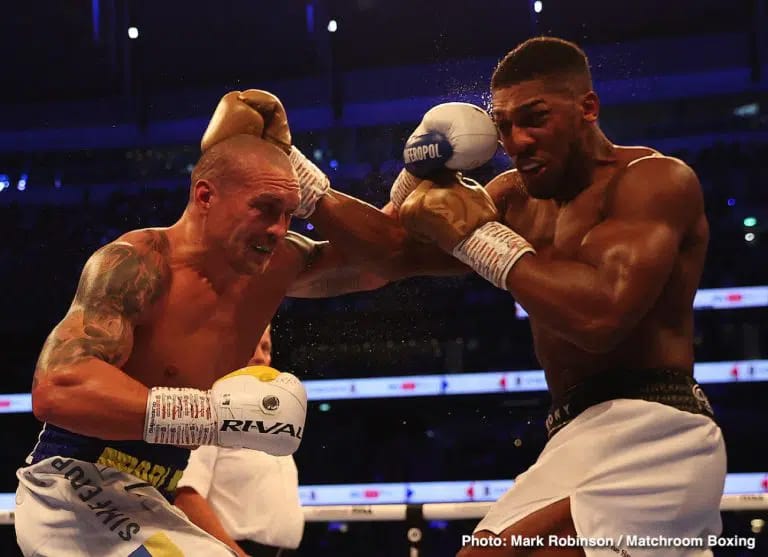 Joshua will face Oleksandr Usyk later this year in a rematch for the unified heavyweight titles but has dropped below Tyson Fury’s cousin Hughie in the WBA rankings.

That hasn’t stopped WBC from putting him in fifth place on their monthly rankings. Joshua will compete for the WBA, WBO and IBF titles against the unbeaten Usyk, as well as the less sought-after IBO belt.

But should he lose, it will be a long road back to the WBA title, after he was ranked behind Daniel Dubois, Michael Hunter, Robert Helenius and Hughie Fury.

Joshua has beaten out Deontay Wilder for his place, with the DEONTAY sitting below him in the sixth, while the list is rounded out by Agit Kabayel, Arslanbek Makhmudov, Zhan Kossobutskiy and Martin Bakole.

Andy Ruiz Jr has been removed from the list as a fight with Tyson Fury edges closer, although Fury’s WBC belt won’t be on the line if that is the case.

Do you think it’s unfair to put Anthony Joshua at No.5 in the heavyweight rankings? Let us know your thoughts in the comments section below! Joshua has been training with Cruiserweight Champion Lawrenceville Okolie for mobility and has been receiving advice from Mayweather in the buildup training for the second bout with Usyk.

The WBA currently have two champions, with Usyk holding the ‘super’ title which is considered the legitimate world level belt, and Trevor Bryan set to finally face Manuel Charr later this month.

In another big news, the governing body in charge of Fury’s world heavyweight title has set the split for his mandatory title defence against Whyte at a massive 80-20 in favour of the champion.

Tyson Fury will receive 80 per cent of the purse for his mandatory title defence against Dillian Whyte because of the pair’s previous earnings.

Fury is a massive global name, whose last two fights have been big Stateside pay-per-view title fights with millions on the line against Deontay Wilder.

Meanwhile, Whyte is better known in the United Kingdom and is said to have earned considerably less than Fury for his last three bouts, two against Alexander Povetkin and one with Mariusz Wach.

And Mauricio Sulaiman, the president of the WBC; the governing body that is responsible for Fury’s world heavyweight title, has said that previous purses dictated the massive split disparity.

None of the lightweight world champions facing each other.

Jake Paul earns more money than most other fighters.

It’s not for us to tell fighters to retire, but some are certainly closer to the end of their career than the beginning…

And the calendar for January 2022 is as follows:

Happy New year. Have your goals all been met? Cheers

Malikawa urges sports journalists to do more in discharging their responsibilities