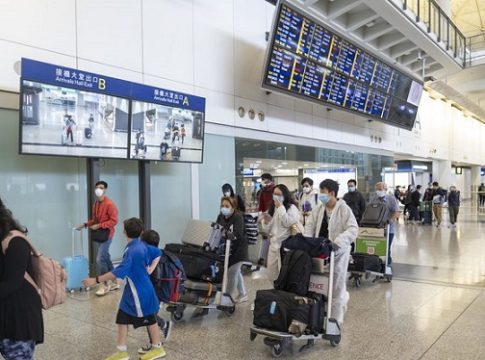 Hong Kong has banned flights from the UK for two weeks over fears of a fifth wave of COVID-19 infections.

The city announced a ban on incoming flights from eight countries – including Britain and the United States – and tightened restrictions on Wednesday.

Health authorities are also currently scouring the city for the close contacts of a COVID-19 patient, some of whom are believed to have been aboard a Royal Caribbean ship on a “cruise to nowhere” that had been ordered to cut short its journey and return to port.

Australia, Canada, France, India, Pakistan, and the Philippines are also on the list of countries that will be banned from 8 January to 21 January, Hong Kong’s leader, Carrie Lam, announced.

She said the government would also ban indoor dining at restaurants after 6 pm from Friday, and close swimming pools, sports centers, bars and clubs, museums, and other venues for at least two weeks.

“We’re yet to see the fifth wave, but we’re on the verge,” Ms. Lam warned.

Hong Kong recorded 38 new coronavirus cases on Wednesday, though only one was a local community transmission. The others were people who had returned to the city and tested positive during quarantine.

The city saw the end of a three-month streak without community cases and the first local transmission of the Omicron variant on 31 December.

“We are worried there may be silent transmission chains in the community,” Ms. Lam said.

She said the government would not suspend school classes at the moment “for the benefit of children”.