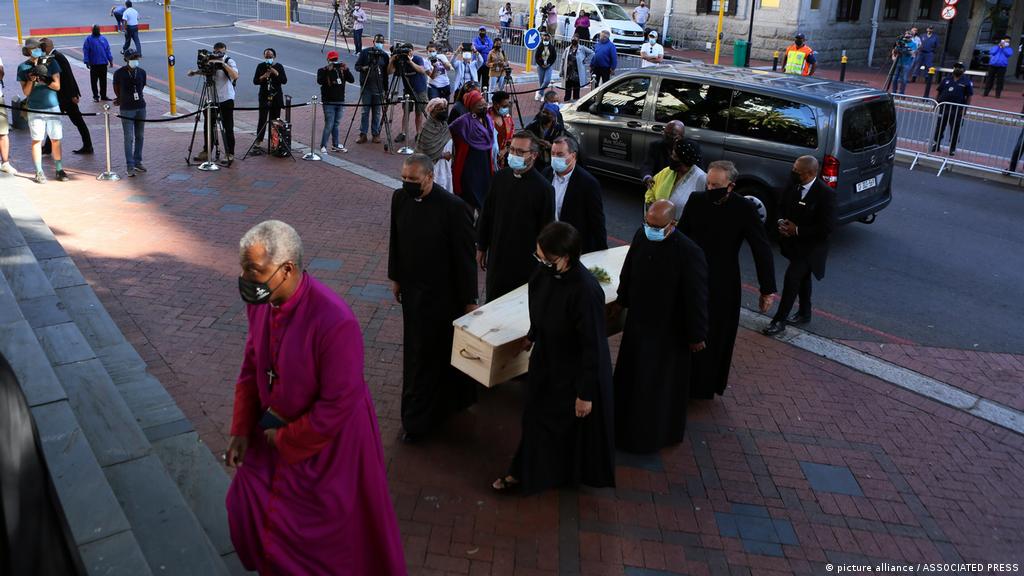 South Africa bade farewell on Saturday to Archbishop Desmond Tutu, the last great hero of the struggle against apartheid, in a funeral stripped of pomp but freighted with tears and showered with drizzles of rain.

Tutu died last Sunday at the age of 90, triggering grief among South Africans and tributes from world leaders for a life spent fighting injustice.

Family, friends, clergy and politicians gathered at Cape Town’s St. George’s Cathedral where, for years, Tutu used the pulpit to rail against a brutal white minority regime. That is where he will be buried.

“We thank you for loving our father… because we shared him with the world, you share part of the love you held for with us, so we are thankful,” said Tutu’s daughter Mpho.

Tutu’s widow Nomalizo Leah, known as “Mama Leah”, sat in a wheelchair in the front row of the congregation, draped in a purple scarf, the colour of her husband’s clerical robes.

President Cyril Ramaphosa delivered the main eulogy for Tutu, who was awarded the Nobel Peace Prize in 1984 for his non-violent opposition to white minority rule.

Hundreds of well-wishers had queued on Thursday and Friday to pay their last respects to Tutu as he lay in state at the cathedral. On Saturday, his simple coffin was once again wheeled into the church as the requiem Mass got underway.

“Only one hundred guests had been invited to attend the very small and private service inside the cathedral,” said Nadine Theron, FRANCE 24’s correspondent in Cape Town, South Africa.

Life-size posters of Tutu, with his hands clasped, were placed outside the cathedral, where the number of congregants was restricted in line with Covid-19 measures.

Famous for his modesty, Tutu gave instructions for a simple, no-frills ceremony, with a cheap coffin, donations for charity instead of floral tributes, followed by an eco-friendly cremation.

“The most amazing thing about ‘The Arch’, as he was known by the whole country, is that it didn’t matter who was in power. Whether it was the apartheid government against which he fought very vociferously or whether it was Nelson Mandela’s ANC party, he was staunchly critical of anything that smacked of corruption,” Vivienne Walt, Time Magazine’s correspondent in Paris, told FRANCE 24.

“In recent years, there has been rampant corruption among the leadership of the ANC, the leadership in charge of the country. Tutu was never shy about criticizing them and in fact at one point said, ‘We are going to get to a moment in which the young people of this country rise and revolt against the ANC just as they did against apartheid’,” Walt said.

Ramaphosa designated a state funeral, one reserved for presidents and very important people, to the late archbishop.

Under a grey sky and drizzle, mourners were ushered into the cathedral. Rains, according to historian Khaya Ndwandwe “are a blessing” and show that Tutu’s “soul is welcome” to heaven.

Other’s mourners were Elita, the widow of the last apartheid leader FW de Klerk, who died in November.

Conspicuously absent from the funeral was one of Tutu’s best friends, the Dalai Lama. He failed to travel due to advanced age and Covid restrictions, his representative Ngodup Dorjee, told AFP outside the church.

“Our partnership struck a chord perhaps in the hearts and minds of many people: a dynamic black leader and his white deputy in the dying years of apartheid; and hey presto, the heavens did not collapse,” said Nuttal.

“We were a foretaste…of what could be in our wayward, divided nation”.

The two forged a strong relationship, illustrating for many how a white leader could work for a black leader. Nuttall went on writing a memoir titled “Tutu’s Number Two” about their friendship.

Under apartheid, South Africa’s white minority cemented its grip with a panoply of laws based on the notion of race and racial segregation, and the police ruthlessly hunted down opponents, killing or jailing them.

With Nelson Mandela and other leaders sentenced to decades in prison, Tutu in the 1970s became the emblem of the struggle.

The purple-gowned figure campaigned relentlessly abroad, administering public lashings to the United States, Britain, Germany and others for failing to slap sanctions on the apartheid regime.

At home, from his pulpit, he slammed police violence against blacks, including the gunning down of school students during the 1976 Soweto uprising. Only his robes saved him from prison and were a shield from police brutality for many protesters.

After apartheid was dismantled and South Africa ushered in the first free elections in 1994, Tutu chaired the Truth and Reconciliation Commission, which exposed the horrors of the past in grim detail.

He would later speak out fearlessly against the ruling African National Congress (ANC) for corruption and leadership incompetence.

(France24 with AFP and Reuters)