HomeColumnsBetween Christmas in Saudi Arabia and a new Cathedral in Bahrain: Lessons...
Columns 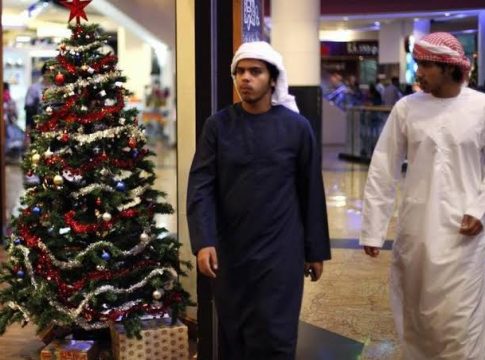 The most expensive painting in the world is, Salvator Mundi (Savior of the World). It is Leornado da Vinci’s depiction of Jesus Christ holding a crystal orb commissioned in 1605 by King Louis XII of France that was acquired for $450 million by the 46-year-old Saudi crown prince, Mohammed Bin Salman Al Saud (MBS) in November, 2017.

In May, he followed up with another visit eventually meeting Coptic Pope Tawadros II. During that second visit he invited Tawadros to Saudi Arabia. By December, the Coptic Pope conducted the first officially allowed church service in the oil rich desert kingdom since it was unified as a nation in 1932.

Christmas, 2021 was also allowed to be celebrated openly by adherents.

Saint Mark’s was established in the year, 969. The present structure visited by MBS was consecrated in 1963.

In neighboring Bahrain, the largest Catholic church in Arabian Peninsula was consecrated on December 10, 2021.

Named, Our Lady of Arabia Cathedral on 9,000 square meters of land, the new edifice that can accommodate up to 2,300 believers was gifted by the ruler of Bahrain, Hamad bin Isa bin Salman Al Khalifa. The king himself was present at the inauguration in Awali Municipality some 20km from the kingdom’s capital, Manama. It will also be the headquarters of the Northeastern Apostolic See, which includes Bahrain, Kuwait, Qatar and Saudi Arabia.

What is really going on in overall context?

Globalization is the; “growing interdependence of the world’s economies, cultures, and populations, brought about by cross-border trade in goods and services, technology, and flows of investment, people, and information.”

The Christmas message of the Premier of the North dated December 25, 1959 is retrospectively instructive;

“We are people of many different races, tribes and religions, who are knit together by common history, common interests and common ideals. Our diversity may be great but the things that unite us are stronger than the things that divide us.

On an occasion like this, I always remind people about our firmly rooted policy on religious tolerance. Families of all creeds and colours can rely on these assurances. We have no intention of favouring one religion at the expense of another.

Subject to overriding need to preserve law and order, it is our determination that everyone should have absolute liberty to practice his belief. It is befitting on this momentous day, on behalf of my ministers and myself, to send a special word of gratitude to all Christian missions.”

I do not know if the 86-year-old, King Salman bin Abdulaziz Al Saud or the 71-year-old, King Hamid bin Isa Al Khalifa have read Janine de Giovanni’s book presented to the public in October, 2021 entitled, “The Vanishing: Faith, Loss, and the Twilight of Christianity in the Land of the Prophets”.

One thing is however obvious, the Arab monarchs apparently share the same mindset as, Thomas Jefferson (1743-1826) the 2nd Vice President and 3rd President of the United States who maintained, “It does me no injury for my neighbour to say there are twenty gods, or no god. It neither picks my pocket nor breaks my leg.”

Kings Salman and Hamid are no doubt as ardent students of Globalization as Sultan of Sokoto, Muhammadu Attahiru II and Shehu of Borno, Abu Bakr bin Ibrahim al-Kanemi.

Globalization has always been like a moving train, you either come on board or it runs over you.

“At the start of the First World War, the Ottoman Empire called for all Muslims to wage jihad against Britain. Lugard jittered and started contingencies against any armed insurrection in the North. But the, Sultan of Sokoto and other emirs told him not to worry. Lugard had ensured they kept their religion, morality and customs even after conquest. Hence no call for jihad against the British from Turkey would happen in the North.”

The Shehu of Borno even wrote in a handwritten letter to Lugard that he had an array of Imams in his courtyard praying for the success of British arms. The letter is worth further quoting:

‘In such a case Allah is on our side. Our Lord Muhammad saith: ‘Those who break friendship, kill them like pagans. If you kill them perhaps, they will repent.’ I have assisted the Resident with all that has been required, horses, donkeys, bullocks, carriers and corn, and everything that he asked for. The Resident told me that the King of England wanted them. I am the King of England’s servant. Why should I not help him?’

The Sultan of Sokoto and Shehu of Borno were each awarded, Commander of the British Empire (CBE) in recognition of their loyal assistance during the Great War.”

Lest we forget in a letter dated 23rd day of Rabee-ul-Thani, 1238 (January, 1824) the Shehu of Borno, Muhammad el-Ameen El Kanemi reminded the Sultan of Sokoto, Muhammadu Bello;

“You are well aware of what is stated in Alcooranic sayings upon the subject of the observance of honour, dictated by our Lord, the Apostle of God; and that the true Mooslemeen have always avoided shedding the blood of Christians, and assisted and protected them with their honour.”

Is Attahiru Jega running for president in 2023, if so, why not?