Causes of farmers-herders’ conflicts, interfaith and urban violence in Kano 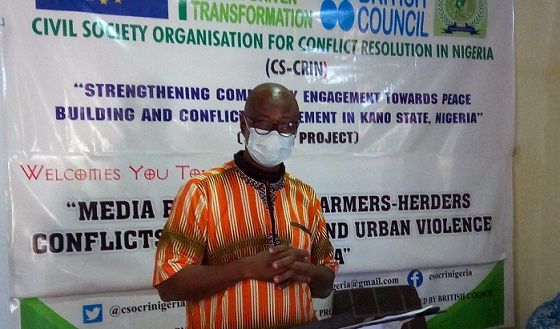 These violence against humanity has greatly affected our Socio-economic life, peace and security, democracy, human, community and rural development negatively, this have also exposed some gaps in the States, National and International community’s that begs for urgent and proactive response with determined, concerted and coordinated efforts.

Additionally, the impact of COVID-19 on the economy has resulted in job losses, with serious, additional implications to the peace and stability of Nigeria.

In Kano, the Civil Society Organization for Conflict Resolution in Nigeria (CS-CRIN) in a press conference, Tuesday, says encroachment of cattle routes by farmers and lack of adequate grazing land for herders due to the illegal selling of the grazing area by government and traditional rulers is one of many causes of these conflicts in the state.

The project is supported by Agents for Citizen-Driven Transformation (ACT) Program of the British Council funded by European Union.

CS-CRIN is working to contribute to conflict mitigation and reconciliation by focusing on initiatives that restore Community Engagement for ethnic and religious unity, rebuild a culture of Peace between factions, and involve credible Local and Non-State actors in the process with activities that support early warning systems in communities at risk of violence and atrocities.

To implement the project, CS-CRIN engages and work with communities, local and national authorities; youth and women groups, traditional/religious leaders, citizens groups and other relevant stakeholders to play effective roles in the management, prevention, mitigation and resolution of disputes stemming from farmers/herders, host community-investors and inter-religious conflicts.

Mr Aremu says findings by his organization reveals that other causes of the farmer/herders’ conflicts in Kano state include delay in harvest by farmers and early arrival of nomads before farmers finish harvesting, Illiteracy among the herders and the farmers as well, competition on scarce land and water resources coupled with increase in population, desertification and draught.

“There is also a lack of dispute resolution mechanism and Impatience amongst them, poor Justice in leadership and Inadequate political will on the part of government, Illiteracy (poor educational levels of both farmers and the herders), night grazing and negligence on the part of the farmers, herders and the government.”

Mr Aremu says to address these challenges government must deliberately provide adequate grazing land for the herders to feed their livestock, ensure justice in leadership/ good leadership, provide functional nomadic schools for herders and their children to avail them with meaningful literacy.

He also says there should be regular orientation, sensitization and mobilization to both parties on the negative effect of conflict and its consequences and a continues war against bribery and corruption.

On interfaith conflicts, the findings reveals selfishness and knowledge gaps among religious leaders as the major cause.

He says: “This can be addressed by religious if they improve on their sermons by incorporating peacebuilding and religious harmony, while the Press, CSOs and Security Agencies continue to monitor the process.”

“On the other hand, is the urban violence in the city such as phone snatching, GBV, rape and thuggery in which is orchestrated by the youthful population mainly for survival.”

Some of the recommendations proffered by CS-CRIN include but not limited to employment opportunity for the youth, good formal and non-formal education with parental upbringing, justice, equity and fairness (margin between the rich and the poor is wide in Nigeria.), and the provision of social amenities for youths.

He also says Chapter 2 of Constitution of Federal Republic of Nigeria (CFRN) should be made “Justiceable” to eliminate some gaps.