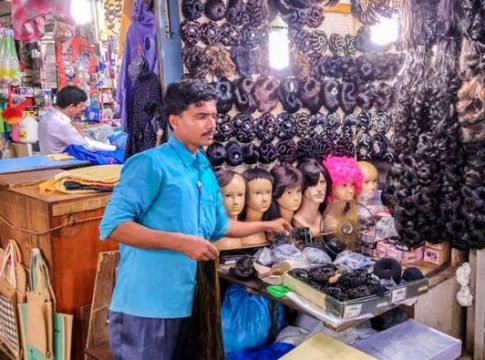 Don’t change the colour of your hair

I used to think Nigeria was the most diverse and complex nation until I visited India, the Land of deities. Back then, Mumbai was Bombay.

“Manibhen Yashwanthpur was up early morning, and after waking her husband and their two children, she packed an orange sari into a red plastic bag. Mrs. Yashwanthpur is 30 years old, a thin, serious woman who looks 40. Her hair is long and dark brown. It is beautiful hair, and today is the day she plans to offer it to Lord Venkateshwara.

At some point in the marriage, her husband began drinking brandy, lots of it. He also beat her, for years. He routinely drank away the money the couple earned working at the local cement factory.

A year ago, Manibhen prayed to Lord Venkateshwara, asking him to remove the scourge of her husband’s alcoholism from her family once and for all. Her husband stopped drinking a month ago. ‘Now if that isn’t a miracle,’ she says, smiling.

The temple barber wets Manibhen’s hair, ties it together with rubber bands on both sides and applies his razor, exposing her scalp, bit by bit, making a scraping sound as he works. Manibhen sits in front of the barber, her legs crossed and her face unmoving. The procedure takes four minutes, and then Manibhen is bald.

It will take her years to grow back the hair she had only a few minutes ago. She wraps a scarf around her shaved head. Shaving the head is an age-old Hindu ritual. Manibhen receives no compensation for her offering.”

After sorting and processing some lady somewhere not only purchases another woman’s packaged wahala proudly attached to her head but brings it to her own home; “Trouble dey sleep, yanga wake am up”

1 Corinthians 11: 10 poses a major challenge – “For this reason the woman ought to have a symbol of authority on her head,” so does Verse 7 which earlier states – “For a man indeed ought not to cover his head his head,” yet I can’t do without my, “Zanna Bukar” cap!

While theological interpretation specifies these injunctions are for prayer times aren’t we to also, “Pray ceaselessly” – at all times?

Each period like this there is a lot of debate over: how Christian is Christmas?

My response has always been: If you dey do, do. If you no do, no do!

For me, the Yultide period is for celebration sober reflection and critical self-examination.

Merry Christmas and a Happy New Year, my friends. Peace and goodwill to all!

Is Attahiru Jega running for president in 2023, if so, why not?