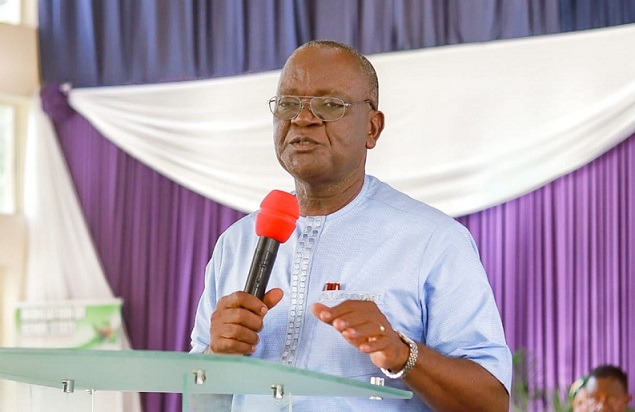 Governor Samuel Ortom disclosed this Sunday, December 19th, 2021 at the Chapel of Grace, Benue Peoples House Makurdi during an interdenominational thanksgiving service to mark the end of seven days fast and prayer for the peaceful selection of a new Och’Idoma.

He stated that the Community Volunteer Guards which had already kicked off in some local governments across the state will use lawful weapons to assist conventional security agencies in safeguarding the State.

State Chairman of CAN, Reverend Akpen Leva expressed belief that God will answer their prayers for a worthy Och’Idoma to emerge and advised Benue State Government to organize a thanksgiving service to show appreciation to God for His numerous good deeds in the state.

He called on the public to be vigilant during the 2021 yuletide season and be security conscious while celebrating.

In an exaltation, Pastor Dave Ogbole said God is interested in kingship amongst men, stressing that “the concern of who becomes the new Och’Idoma is of interest to God.”

He described Governor Ortom as being fortunate, as he is witnessing the enthronement of a new Tor-Tiv and Och’Idoma under his tenure, even as he prayed God to anoint a man after His own heart.

It will be recalled that the Benue State chapter of CAN had on Monday, 12th December, 2021, declared seven days fast and prayer to seek God’s guidance in the selection of a new Och’Idoma.

Governor Ortom had announced 30th December as the date for the selection of a new Och’Idoma.