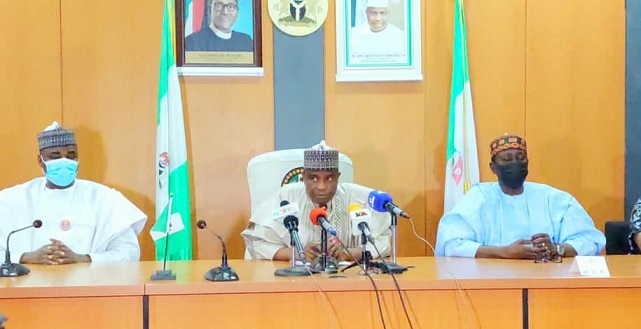 The Governor while briefing the the delegation on the security situation in the state pointed out that the consequences of operation Hadarin Daji in Zamfara launched by the Nigeria Army in Zamfara had exposed Sokoto State to broad daylight attacks and kidnappings especially in parts of Isa, Sabon Birni, Tangaza, Illela and several other local government areas of the state.

The Monguno’s team which include the Inspector-General of Police, Usman Alkali Baba, the Chief of Defence Intelligence (CDI), Maj. Gen. Samuel Adebayo, the Directors-General of the State Security Service and the National Intelligence Agency, Yusuf Maitama Bichi and Amb. Ahmed Rufa’i Abubakar held a closed-door meeting which lasted for hours at Government house Sokoto.

Tambuwal further told the delegation that: “Operation Hadarin Daji,” the precursor of the escalation of tension and crisis in Sokoto state “…was carried out without any blockage around the neighboring states, particularly Sokoto

“The timing of the operation, whereby, unfortunately, our security agents do not have enough equipment to move and contain those that would pander towards Sokoto state didn’t help the timing as well.

“The timing and way the operation was carried out left Sokoto very vulnerable to attacks and kidnappings.” Says the Governor.

“It appears those bandits pursued from Zamfara state have relocated to Sokoto state. This is a very serious concern,” he said,

“I am appealing to President Muhammadu Buhari “to deploy more troops and resources to Sokoto state to fight the criminals.

“There is need for more boots on the ground. I am familiar with the situation at the center, but I believe that something can be done, and, that should be done urgently and expeditiously because our situation is getting out of hand,” he added.

Tambuwal said in his capacity as the Deputy Chairman of the Nigeria Governors Forum (NGF), he was fully aware of his counterpart’s commitment and support to the President in the fight against insecurity and other evils across the country.

“Here in Sokoto state, you can verify this from the heads of security agencies, there is nothing they have asked of us that we have not done. Since the commencement of this administration, we have given security personnel in Sokoto state not less than 500 vehicles. We are also doing whatever it takes in terms of funding from our own end despite the lean resources that we have as a state,” he said.

Earlier in his remarks, Gen. Monguno, who thanked Governor Tambuwal for cutting short an official trip to receive the Federal Government delegation at a very short notice, said they were in Sokoto “on a specific mission on the instruction of President Buhari, “to condole you and the very good people of Sokoto state as well as His Eminence, the Sultan of Sokoto, who apparently is in Abuja, over the unfortunate incidents that have been occurring over the last couple of weeks.

He explained that their visit “affirms the seriousness with which Mr President views the occurrence of the last couple of weeks, stressing that: “It has been unfortunate series of developments in which very innocent lives have been lost.”

“No life lost is one that is less important. Every life of every citizen is important; and, it gives great concern to Mr President that needless loses of lives are occurring.

“Mr President wants me to convey his profound condolence over the loss of all the citizens who have departed. He wants us to also express his deep sympathy as well as his determination that the perpetrators of this very gruesome, wicked activities are apprehended and brought to book.

“The very fact that the very top security echelon in the country is here is an indication that Mr President wants us to address this issue so that some form of comfort is given to the people of Sokoto state by a definite closure through a definite process in concluding what has happened to these unfortunate and innocent citizens.

“Mr President is deeply troubled that fellow citizens had to go through this trauma. He has charged to make sure that all the relevant agencies do not rest until we are able to flush out the perpetrators of not just these last two incidents that occurred, but also previous incidents,” he said.