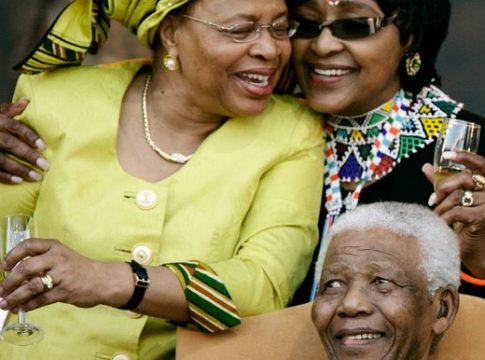 Nelson Mandela (1918-2013) spent his most productive 27 years in various dingy prison cells but living his last days in a posh mansion. What more could a man ask for?

Agreed, there is no perfect marriage but the irony is that, while the tortuous marriage between Madiba and Winnie Madikizela (1936-2018) could painfully endure nearly 3 decades of separation it could barely last 2 years of togetherness.

No sooner he breathed the fresh air of freedom, he dumped her and married Graca Machel, a widow and mother 8.

Ironically, the 9-bedroom mansion at Houghton, in a swanky Johannesburg suburb that links three of them together is now a hotel open to the public instead of a private family home.

This is the ultimate validation of the dictum – “Two wrongs do not make a right” because Madiba dumped the gentle and docile, Evelyn Mase, his wife for 14 years and mother of his 4 children when he married the extremely volatile and fiery 22-year-old, Winnie in 1958.

The first Mrs. Mandela died bitter insisting, “The whole world worships Nelson too much. He is only a man” she always maintained, “How can a man who committed adultery and left his wife and children be so popular?”

Yet, when she died in April 2004, Mandela attended her funeral, along with his second wife, Winnie Madikizela Mandela, and third wife, Graca Machel.

All hail, King Solomon of Soweto!

Sanctuary Mandela is a great name for boutique hotel instead of eventually becoming a boxing ring for quarrelling children and grandchildren.

The presidential suite used to be Mandela’s own bedroom where Winnie and Graca nursed him till his demise on December, 5 2013.

Wife No. 2 and No. 3 had to tolerate each other because the Mandela brand was worth millions of dollars – enough to go round. So, instead of fighting each other they managed each other as seen together in their expensive jewellery and champagne glasses back in 2008 celebrating the 90th birthday bash of Madiba. In the picture Winnie was, 72 and Graca, 63.

The last woman standing is fluent in French, Spanish, Italian, Pourteguese and of course, English she was Mozambique’s onetime minister for Education and Culture before becoming First Lady to Samora Machel who died in an air crash in 1986. They had 2 children but had 6 with the previous First Lady. Graca as the best friend of the widow took over the half a dozen as hers.

As First Lady, Graca reportedly influenced the appointments of Winnie’s two daughters, Zenani and Zindziswa as ambassadors to far flung Argentina and Denmark respectively. It was a smart move to break a probable Winnie and daughters alliance against her.

In as much Winnie had previously claimed, “I am not fighting to be the country’s First Lady. In fact, I am not the sort of person to carry beautiful flowers and be an ornament to everyone.”

A boutique hotel is a small individualized hotel that has a highly luxurious setting as its unique selling point.

When Mandela came back to his house in Soweto after his release from prison in 1990, his opening words were, “I have come home at last.”

He later wrote in his autobiography, “That night I returned with Winnie to No. 8115 in Orlando West. It was only then that I knew in my heart I had left prison. For me, it was the centre point of my world, the place marked with an X in my mental geography.”

The moral here is that, if you don’t properly take good care of your family matters that mansion that you worked so hard or looted the treasury to meticulously build might one day end up as a shopping plaza or nightclub….or even hotel.

“Vanity upon vanity, all is vanity.”