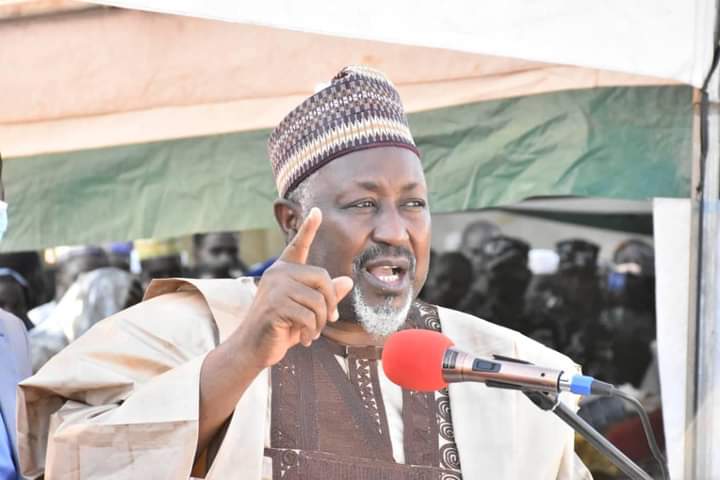 The Jigawa state Governor Muhammad Badaru Abubakar has threatened to impose another round of lockdown in the state if people continue to reject and spreading rumor about Covid-19 vaccine.

The governor who was visibly disturbed made the remarks while speaking at the flag-off of Covid-19 mass vaccination exercise campaign held in kiyawa local government of the state.

Governor Badaru promised to resist any attempt to turn Jigawa like Spain and other foreign countries where scourge of the disease resurfaced as a result of public negligence.

The Governor assured the people of the state that, the vaccine is effective and safe for protecting human life from the deadly virus.

He however charged local government Chairmen, traditional leaders to ensure maximum campaign and enforcement of the vaccine in their area.

The Governor noted that, he will not mind to impose another round of lockdown in the state irrespective of social and economic consequences on everyone if the vaccination coverage remains poor.

We are committed to reaching out to at least 5000 eligible people per each of our 287 political wards between now and end of the year 2022.

In his speech at the occasion, the Executive Director, National Primary Health Care Development Agency (NPHCDA), Dr. Faisal Shuaiba, said, federal government is committed to ensure 111 Nigerians representing 70 of eligible persons received the vaccination before the end of 2022.

Mr Shuaibu who was represented by Dr Kabir Mohammed, the North West Zonal Director of the agency expressed concern on the poor vaccination coverage in Jigawa state saying “a total of 122,200 people have received first dose, while only 53,751 received second dose, this figure is not encouraging” he declared.

According to him, in Jigawa state, over 1.8 million eligible people are expected to receive the vaccine.”

In his speech, the Emir of Dutse, Dr Nuhu Muhammad, who was represented by Senior Councilor, Alhaji Basiru Muhammad Sunusi urged people of the state to come out enmass to receive the vaccine as he has taken his own and looks healthy and hearty.

IPMAN, others back FG on petrol subsidy removal by 2022