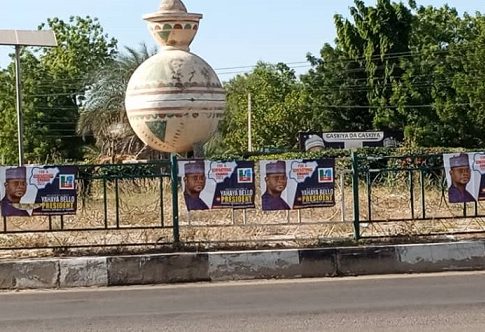 Malam Musa Salisu Maishago, one of the All-Progressive Congress (APC) stalwarts in the state described the appearance of the posters as a symbol of deepened internal democracy.

He said, Governor Yahaya Bello of Kogi state is a very courageous leader and in accordance to APC constitution, he is entitled to contest for any ticket under the party.

Musa Ibrahim Kazaure, another APC member said it is too early to start campaign but for the group who want Yahaya Bello to aspire for the presidential ticket, they are right democratically.

“As an APC member, any person eyeing for any position in my party I will respect him, but it is time that will decide who I will support to be my party flagbearer.”

However, one of APC leaders in the state, Alhaji Sani Maiunguwa described the appearance of the posters on some major roads of the state as a sign that Jigawa state is peaceful and accommodative.

He charged APC members in the state to respect any party aspirant and treat him with respect and dignity in accordance to the party constitution.

In her reaction, Mrs Fatima Shehu said, she is not against anybody to aspire for the party’s ticket, but to her, the 2023 APC presidential ticket should be given to a woman to entrench inclusiveness in the party.

The campaign posters which were sponsored by a group known as Youth Organization for Bello described Yahaya Bello as candidate for generational change.