HomeColumnsThere is an Ikoyi in China; Another one in America
Columns

There is an Ikoyi in China; Another one in America 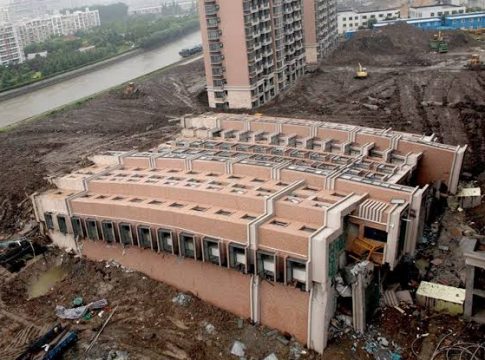 “A doctor’s mistakes can be buried but an architect can only advice his clients to plant vines.” – Frank Lloyd Wright (1867-1959)

For a long time to come different salacious stories of the rollercoaster life of Femi Osibona will be told and retold in versions ranging from the banal to the outrageous.

A Fourscore tenant elsewhere in Ikoyi near Gerrard Road, Dele Momodu has certainly not helped matters by claiming that the late Femi had once confided in him;

Nobody will be able hear Mr. Osibona’s side of the story.

First, somebody, somewhere knew it could happen and warned about the impending catastrophe.

Second, if it happens it is neither sudden nor overnight. Hairline cracks would have appeared, then expanded wide enough for a lizard slip through over time. Ditto vibrations that would have gradually increased in tempo to become reverberations.

Both culminated at 5.40 am on June 27, 2009 when the 13-storey Block 7 of Lotus Riverside development tumbled over. One construction worker was killed. An excavated mud pile was said to undermine the foundation footing of the collapsed block at Minhang District, Shanghai in China.

Back then the blog, ChinaDaily reported;

“We warned the construction company many times,” said Wang Jinquan, head of Shanghai Guangqi Construction Supervision. “We have been telling them about the mud pile since the end of last year but we have constantly been ignored.”

He explained that supervisors were in a ‘weak’ position, adding: ‘We have to eat’. He refused to elaborate further.”

If found complicit, those who did the “eating” in Ikoyi will one day have their day in court as in China, when a couple of “eaters” that included managerial executives Zhang Zhiqin, Zhang Yaojie and chief supervisor of the project Qiao Lei who were found wanting for Block 7’s collapse. They were arrested and prosecuted.

Lest we forget, on September 12, 2014 a newly constructed multistorey guesthouse within the premises of Synagogue Church Of All Nations (SCOAN) came crashing down. 116 persons including 84 South African nationals died. The investigative panel traced the tragedy to structural failure from within but the defence lawyers of SCOAN and the engineers indicted insisted it was, “a low flying unidentified aircraft”. 7 years and still counting the matter is still in court.

Fallingwater in Fayette County, Pennsylvania was designed in 1935. The masterpiece was costed at $35,000 but the bill eventually spiralled to $155,000 by 1939. It is still considered one of the most outstanding private residences in the world since it was built 86 years ago. The owner, Edgar Jonas Kaufmann and the architect, Frank Lloyd Wright constantly fought, exchanging bitter words sometimes coming close to physical blows over the project.

The structural consultants, Metzer-Richardson Engineers wrote early to absolve themselves in 1935;

“The calculated stresses in the structure do not fall within the limits of those prescribed by acceptable engineering practice. Therefore, the structure does not have a satisfactory factor of safety.”

Despite that damning report the project still went ahead with Mr. Kaufman grudgingly admitting before his death in 1955, “Mistakes have plagued Fallingwater, yet the extraordinary beauty of the house and the delight it brought to the life of its inhabitants form the context in which its construction should be evaluated.”

In 2001 alone, the 4-bedroom edifice built on flowing water cost a whopping $11.5 million in rehabilitative works to save it from collapse. The new owners of Fallingwater charge an entry fee of $5 for endless streams of curious visitors.

Notwithstanding the 2006 National Building Code to enforce regulations and ensure quality and safety in our nation’s building industry, according to a report by the Federal Ministry of Power, Works & Housing between 2014 and 2017 a total of 54 buildings collapsed across Nigeria. By 2020, Building Collapse Prevention Guild put the figure at 43 in the previous 3 years with 17 in Lagos alone.

Arguably, not all building collapses can be necessarily traced to professional negligence, inferior building materials, violation of building codes or disregard for approved conditionalities.

Between September 5 and 7, 2018 residents in Abuja, FCT with Mpape as epicenter experienced a series of intermittent earth low magnitude earth tremors. According to the report an investigation panel headed by DG, National Space Research and Development Agency (NASRDA) Seidu Mohammed, the chief cause was the quantum effect of the tiny vibrations magnified by over 110,000 boreholes sunk in the FCT which dispense an estimated 330,000 metric tonnes of water daily.

This potential hazard has been documented in a Julius Berger report dating back to 1978. Yet, here we are across Nigeria depending more on boreholes than any public water supply.

Femi Osibona had his issues. Don’t we all variously have ours also?

I however celebrate his achievements as a developer despite his friend Dele Momodu claiming, “All I know is that he was a self-made man who depended on no godfather despite being a cousin to Yemi Osinbajo. He was too proud and self-reliant to approach the VP or anybody else for favors”

While Dele should tell that to the Marines, why did Block 7 in China collapse nearly intact while the Ikoyi towers ended up like the aftermath of a controlled demolition?

Why is Mr. Momodu despite an investigation panel constituted by the Lagos government so quick to dismiss the Ikoyi tragedy as an, “unsolvable jigsaw”?

Too many questions, too few answers.