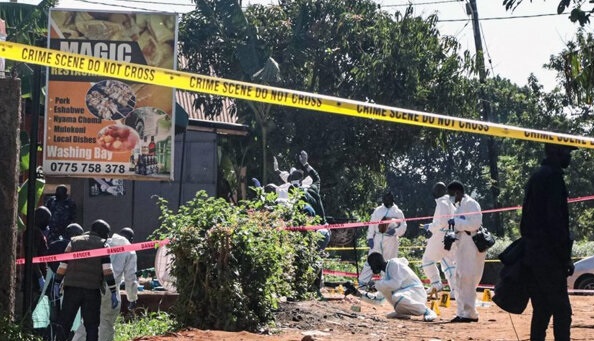 A blast has killed at least two children in a Ugandan village as the country grapples with the third bomb attack in a week.

There was no immediate claim of responsibility for Friday’s incident. According to a senior police official, the device looked like an exotic “jackfruit” and was given to the children while they were playing.

The explosion occurred in Nakaseke district, 60km (27 miles) north of the capital, Kampala. It killed a 14-year-old and a second child with disabilities, police spokesman Asan Kasingye said in a tweet.

You may also read: Uganda’s Museveni says schools to reopen in January

Uganda has been the target of multiple attacks over the past week. A bomb packed with nails and shrapnel exploded in a popular restaurant in Kampala, killing one person and wounding three others on October 23.

The ISIL (ISIS) armed group claimed responsibility for the attack in a statement posted on an affiliated Telegram channel.

The group said some of its members detonated an explosive device in a bar where “members and spies of the Crusader Ugandan government were gathering” in Kampala.

On Monday, a second bomb went off on a bus, killing the suspected attacker and injuring several commuters. Police initially said two people were killed.

Ugandan authorities have been investigating the attacks. A shadowy group called the Allied Democratic Forces (ADF), suspected of links to ISIL, emerged earlier this week as the possible author of the blasts.

ADF is known as the bloodiest of the scores of militias that roam eastern Democratic Republic of the Congo and has gained a reputation for massacres in North Kivu and neighbouring Ituri provinces.

The ADF was initially a coalition of armed Ugandan groups that opposed Ugandan President Yoweri Museveni.

The group moved across the border into eastern DRC in 1995, establishing itself in the rugged Rwenzori Mountains in North Kivu province.

In April 2019, some ADF attacks began to be claimed by ISIL through its outlets on social media. It presented the group as its regional branch – the Islamic State Central Africa Province, or ISCAP.

The United States has placed the ADF on its list of “terrorist groups” affiliated with ISIL.

Ugandan authorities said earlier this week that a police dragnet had picked up a number of ADF operatives suspected of hatching a plot to attack “major installations”.

‘I am not responsible for the impeachment of former Speaker’ – Lalong