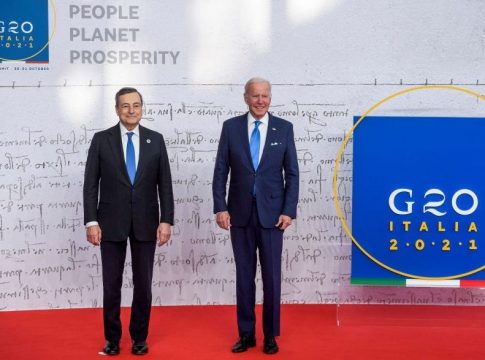 Leaders of the world’s 20 major economies have approved a global agreement that will see the profits of large businesses taxed at least 15%.

It follows concern that multinational companies are re-routing their profits through low tax jurisdictions.

The pact was agreed by all the leaders attending the G20 summit in Rome.

Climate change and Covid are also on the agenda of the summit, which is bringing most leaders together face to face since the start of the pandemic.

The G20 group – made up of 19 countries and the European Union – is short by two leaders, however, with China’s Xi Jinping and Russia’s Vladimir Putin choosing to appear via video link, instead.

The tax deal, which was proposed by the US, is expected to be officially adopted on Sunday, according to Reuters news agency, and will be enforced by 2023.

US Treasury Secretary Janet Yellen said the historic agreement was a “critical moment” for the global economy and will “end the damaging race to the bottom on corporate taxation”.

She wrote on Twitter that US businesses and workers would benefit from the deal even though many US-based mega-companies would have to pay more tax.

he G20 summit comes ahead of the much-anticipated COP26 summit on climate change in Glasgow which begins on Monday. What happens at the G20 may set the tone for COP26, with sharp divisions remaining between countries on their commitments to tackling climate change.

Italy’s Prime Minister Mario Draghi opened the two-day summit with a message of unification, telling world leaders that “going it alone is simply not an option. We must do all we can to overcome our differences”.

There are increasingly dire warnings from experts for the future if urgent action is not taken to cut carbon emissions.

However, he acknowledged that neither the G20 meeting nor COP26 would halt global warming, but could, if the right measures were taken, “restrict the growth in the temperature of the planet”.

According to Reuters news agency, a draft communiqué outlines a promise from the G20 to work towards limiting the rise in temperatures to 1.5C (2.7F), saying it “will require meaningful and effective actions by all countries”.

The draft also notes the need for “developed countries to mobilise $100bn (£73bn) annually from public and private sources through to 2025 to address the needs of developing countries” so they can tackle climate change – a promise richer countries have failed to keep since 2009, when it was initially pledged.

A message to Iran

Separately, the leaders of the US, Germany, France and UK met to discuss their “grave and growing concern” over Iran’s nuclear activities. Iran is not part of the G20 forum.

In a joint statement, the nations said that if Iran continued its nuclear advances, that would jeopardise the possibility of it returning to the 2015 nuclear deal with the US and economic sanctions being lifted.

Former US President Donald Trump abandoned the deal in 2018, reinstating harsh sanctions against Iran. Since then, Iran has increased its nuclear activities, violating much of the multi-national pact.

Talks with Tehran – which have been stalled for months – are due to restart in November.

The last few years have seen many countries looking after number one. They have made their own vaccines, they have put up trade barriers, they have put economic growth ahead of fixing the climate crisis.

Mario Draghi’s point is that this has to stop. The Italian PM is saying that if G20 leaders want to curb global warming, end vaccine inequity, and sort an economic recovery, they have to start thinking and acting more multilaterally.

And that doesn’t just mean coming to summits. It means – at times – putting wider global interests above narrow national imperatives. That is a big ask because it often involves challenging voters. So far not all world leaders seem ready to do that.

There remain divisions over whether much wealthier nations are ready to cut carbon emissions, give more Covid vaccines to developing countries, and stabilise volatile energy prices.

The G20 summit will produce many words. But what will matter are its actions, above all on climate change, for that will play a huge part in determining whether the COP26 summit in Glasgow succeeds or fails.