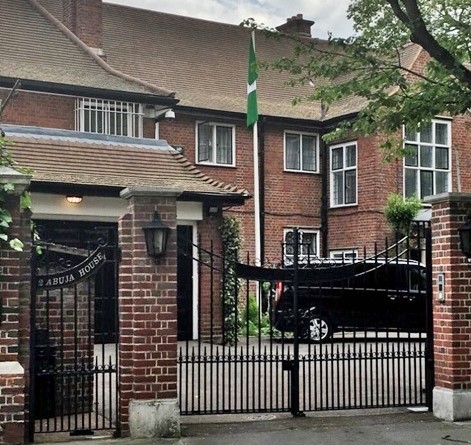 Abuja House is a metaphor of sorts in the recurrent political contest between the North and South.

Located along Campden Hill in the highbrow Kensington, London on the same street as the High Commission of South Africa with Embassy of the Kingdom of Saudi Arabia nearby, it was bought on behalf of the now rested Western Region government by Chief Obafemi Awolowo. Back then the external interests of each of Nigeria’s regions were represented by various, “Agent-Generals”. It was only after national independence that Nigeria had a High Commission.

So, how did a prime property supposed to be jointly owned by Edo, Delta, Ekiti, Oyo, Ogun, Ondo and Osun states end up becoming Federal Government property?

Baba Awo endorsed the handing over of what came to be known as Abuja House to the then Federal Military Government, when he became Nigeria’s de facto Vice President. In chess such a concession is known as, “classical bishop sacrifice”.

The EndSARS protests of October 20, 2020 was an opening gambit on Nigeria’s chessboard to checkmate the shenanigans of Arewa currently in power. Due to the surprise factor and spontaneity, it was a brilliant political flanking maneuver that weaponized youth restiveness.

We have seen this kind of mass protest movie before. First, at Tiananmen Square in 1989, then during the Arab Spring in the early 2010s and eventually with Black Lives Matter ahead of the 2020 presidential polls in the US.

Like EndSARS, all the foregoing had common denominators of decentralized leadership, obscured funding and inexplicable logistics.

Cause and effect is the relationship between two things when one thing makes something else happen. Agreed;

“The (Buhari) government also provided the ‘casus belli’ for the protests by its wrong timing of the increase in the pump price of petrol and electricity tariffs. Coming after the excruciating experience of Nigerians with the Covid-19 lockdown this was a triple whammy that proved too much to bear.

“The in-your-face manner of the introduction of these measures hardly endeared government to the citizens. If anybody had any plans to destabilize the government, there cannot be a better gilt-edged opportunity than that.”

Hear IBB in retrospect on how the Second Republic was blindsided, “You see, to stage a coup, there is one basic element that everybody looks for, there must be frustration in the society.”

He continues, “We couldn’t have done it without collaborators in the civil society, media and people who have means. The elite who participate want recognition, maybe patronage as time goes by.”

Based on the template of the Minna Fox, what is the ultimate objective of EndSARS?

I am not referring to the frustration of the pawns on the streets nor the palpable anger of Social Media commentators, but the permutations of the grandmasters pulling the strings behind the scenes.

Their end game is 2023. They not only want power at the center but plan to restructure Nigeria with the opportunity. EndSARS is therefore a tool for political mobilization, “notice how the protests morphed quickly from a demand for the scrapping of the dreaded SARS to other issues that were not in the original demand.”

Lest we forget, Nigeria’s foremost military historian, Dr. Nowa Omoigui (1959-2021) defines a coup as, “a usually sudden, often forceful, illegal, typically decisive political change of an established order of individuals who hold levers of power or control at any level in any context. When the specific term ‘coup d’Etat’ is used it means a blow to the state.  A creeping coup is one that is not sudden,”

Reportedly, Baba’s, DAILY SKETCH newspaper which published his speech on May 2, 1967 sold in Enugu at an unprecedented two shillings per copy.

Between May 5 and 6, 1996 the Chief and his delegation sat with Colonel Ojukwu with his team for further discussions at Enugu.

It is very important to note that neither the details nor minutes of that meeting have ever been made public to date.

By May 30, 1967 Biafra seceded from Nigeria and the Western Region did not follow suit as earlier promised on May 1.

Instead, Chief Awolowo became vice chairman of the Federal Executive Council and Minister for Finance & Economic Development, positions he tenaciously held on to till June 3, 1971. The Ikenne oracle skillfully positioned himself as Nigeria’s Number Two in an hierarchy of barely educated soldiers.

EndSARS is symptomatic of that kind of, “short-sighted triumphalism”

Mass protests and street demonstrations always have a political end game. In May, 1966 such were effectively used against General Ironsi in Kano, Zaria and Kaduna to soften the ground for, “Paiko’s wedding” – code name for the Northern counter coup of July 29.

The ultimate objective back then was for the North to secede from Nigeria. Then British High Commissioner, Sir Francis Cumming-Bruce and American ambassador, Albert Matthews ensured that didn’t happen.

Despite its ongoing political shenanigans under the current dispensation, Arewa can never be fully wrestled to the ground for two reasons;

First, there is an international missing link in the clamor for Restructuring. As far as London and Washington are concerned, secession and Restructuring are two sides of the same breakup coin.

Second, there is the fatal flaw in the political DNA of the South – the lack of any electorally relevant elite consensus.

“In politics, an organized minority is a political majority.” – Jesse Jackson