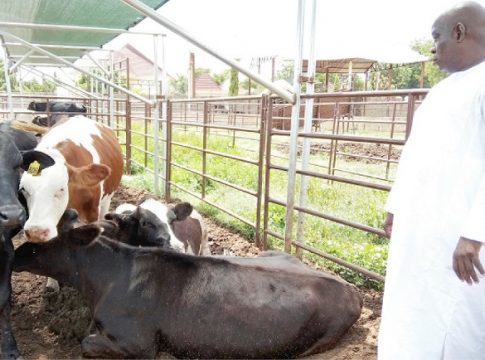 The program which was flagged off last month by the State Ministry of Animal Health and Fisheries Development was aimed at assisting herdsmen toward boosting milk, beef and cattle productions in the state.

The State Commissioner for Animal and fisheries, Professor Abdulkadir Usman Junaidu said the commencement of the program in Toma village of Bodinga local government area was done after series of arrangements and consultations by the ministry.

He said it was closed to a month since when the Ministry flagged off the program in Sokoto and after series of arrangements, the program has now commenced in Tauma village of Bodinga local government area of the state.”

According to him Bodinga as one of the key centers of cattle production especially when it comes to meat processing, the state government de chose to launched the program from the area,” the Commissioner stated.

He explained that the ministry has sensitized the people on the significant of the program and at the same time, the officials of the ministry are going in house to house to conduct the castles inseminations and embryo transfers.

Professor Junaidu stated that the in house-to-house exercise would enable the ministry to keep proper records and improved on the areas for reviewing adding that with that the program would achieve over 80 to 90 percent success when all the process are done the right way.

Already, farmers treated in the program and willing to participate have been registered and the ministry is working hard to ensure that anybody that indicate interest and registered for the artificial insemination and embryo transfer will get the services provided across the 23 local government areas of the state.

In their separate remarks, the Chairman Bodinga Local Government Council, Alhaji Shehu Dabaga and representative of the Central Bank of Nigeria (CBN), Abdu Sule, commended the ministry for commencement of the program after various arrangement toward achieving huge success.

They gave assurances of their full support towards boosting agricultural activities in the state especially in the area of livestock production and among others.

They advised the herdsmen to participate in the program as doing so will add value chain to the economy aspect of their respective communities and the state at-large.